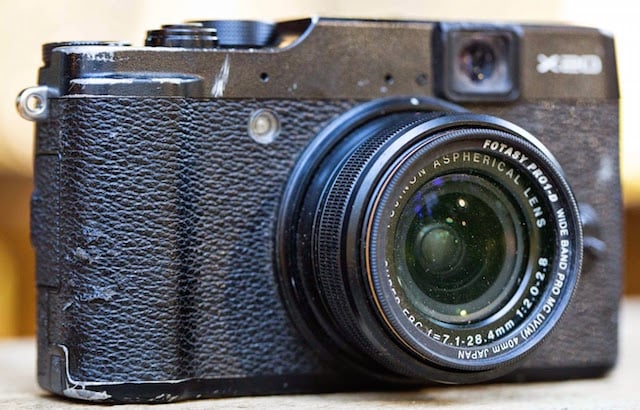 This poor camera has seen some things. For three months, photographer KB‘s Fuji X20 languished in the Colorado wilderness while rain, hail, snow, and animals took turns saying ungentle hellos. And yet, when KB brought it home and charged it up, the X20 started right up!

As KB explains on her blog:

Obviously, it had been through a big ordeal — it’s covered in new scratches and scrapes. It had been pelted with rain, hail, and snow over its 3 months lying in the forest. Plus, animals had obviously played with it. Those are tooth marks, likely from a curious bear, on the far left of the camera. Squirrels gnawed off a few plastic parts of the case. I was glad that I had a UV filter on the lens so it was protected from being scratched.

I brought it home, and I recharged the battery — with almost zero expectation that the camera would work. I put the battery in, and believe it or not, the camera works! I was astounded. It’s not even touted as a weather-proof camera.

Unfortunately, the joy of finding the working X20 three months after losing it is kind of offset by the fact that KB had a trail camera stolen and very likely destroyed.

To read more from KB, head over to her blog, Romping and Rolling in the Rockies, where he shares her adventures and photography.

Image credits: Photographs by KB and used with permission