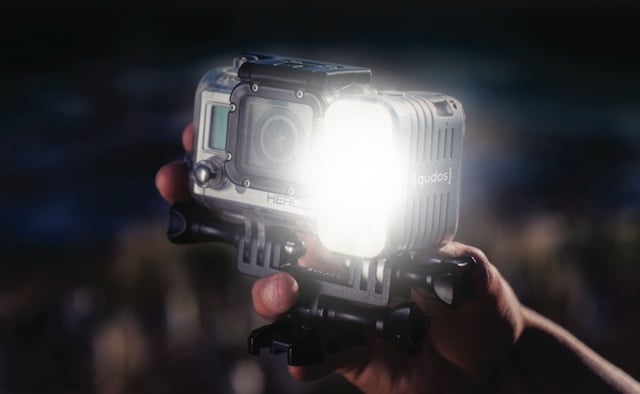 Portable, bright, waterproof and rugged, the [qudos] Action light is an interesting addition to the lighting world that wants to open up a new world of nighttime action cam footage.

You don’t frequently see nighttime action cam shots, and the team at Melbourne Australia-based company Kong thinks the [qudos] Action light can remedy this by offering you a light that can hold its own with any action cam out there.

Delivering an impressive 400 lumens of light from three powerful Cree LEDs, the [qudos] light only weighs 150 grams, can go as far as 40m underwater, and features six settings across three modes to control brightness and light speed depending on the shot you want to get.

Made to be used with GoPros, it works ‘seamlessly’ with the 2, 3, 3+ and 4 versions, as well as the Sony action cam or any action camera with GoPro conversion mounts. Plus, the cold shoe adaptor lets you use it with your DSLR and tripod as well.

Here’s a quick video intro so you can see the light in action:

To find out more about the [qudos] Action light, head over to the Kong website here or pick up your own in either black or silver for $120 on the company’s online store.

BTS: Climbing 2,500 Feet to Photograph One of the Most Inaccessible Churches in Africa