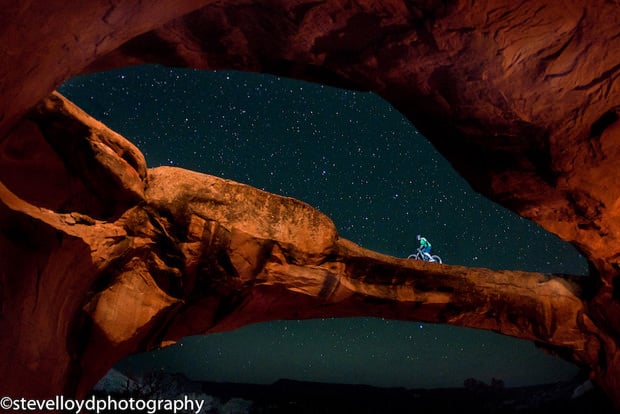 This idea came to me after I had shot this photo in the daytime. I had been seeing a lot of celestial-type shots on the Internet, but most were just landscapes with no action. My main focus is action sports, and I love a challenge. I figured I would give it a try. To start my photo, I knew I needed to light up the interior of the arch, the arch itself, and the rider. Hot shoe flashes have plenty of power at this time of night, so I brought three Canon 550EX flashes. A lot of photographers use spot lights or flashlights to “light paint” photos like this, but to keep my exposure time short enough to not have the stars moving in the photo, plus capture the action, it was necessary to use flashes to expose the arch and rider. 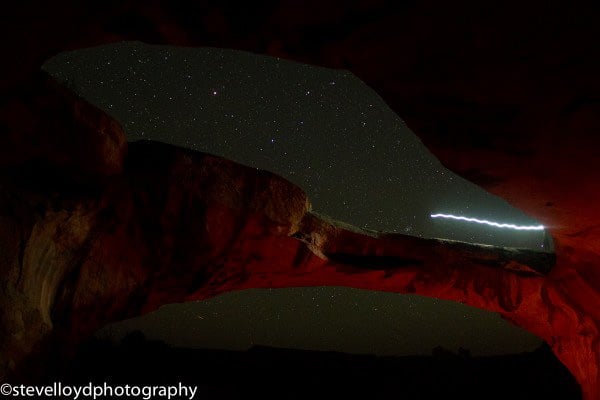 The setup of this photo required me to divide the lighting into two different sections.

For this setup on the interior of the arch I had one 550EX flash with a PocketWizard FlexTT5 set on manual and powered at 1/8 with an orange gel placed over the flash. Using manual was necessary to achieve the desired exposure, otherwise the FlexTT5 will blast out the setting. Remember it is almost pitch black on the underside of the arch where the camera is set up, so just a little bit of light can go a long way.

The next flash was set up on top of the arch illuminating the arch itself. This flash had a FlexTT5 to trigger and was set to manual at 1/4 power. It also had an orange gel to give our arch the desired orange glow. With these two flashes in place and the camera set up with cable release attached, I started testing for my exposure on the arch. I already knew I wanted my exposure to be around 25 seconds to allow as much light in as possible but to keep the stars relatively still in the photo, so it was basically testing how much power to add or take away from the flashes to come up with the exact exposure on the arch. 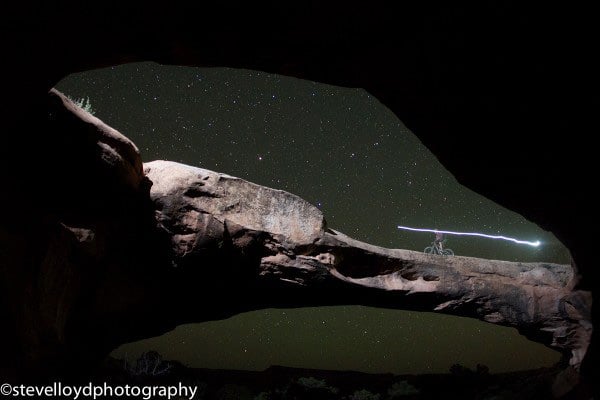 Once I had dialed in my exposure on the arch it was time to move to the bike rider. For this part of the exposure I was using a Canon 550EX flash with no PocketWizard attached and no gel to keep the rider a more natural color. This flash would be manually triggered by an assistant at the moment the rider passed a decided point. A small head lamp was placed on the arch to illuminate the path for the bike rider to ride, but did not effect the exposure too much due to it only illuminating a portion of the arch not visible to the camera. It was shut off right after the rider’s exposure was lit by flash. After a few tests the flash was turned to 1/8 power. With the two exposures figured out and everything in place it was time to combined the two into one exposure and one photo.

Although the photo will be taken with one exposure it will need to be divided in to two different portions. I divide the two different sections of my photo by exposing the first (the arch with my orange flashes) and then covering the lens with my hand until the rider was ready to move. As he rides onto the arch I remove my hand from the lens at the second the rider is on my mark and instruct the assistant to pop the flash at that exact time. Immediately after he popped the flash, I covered up the lens again to stop any kind of exposure to the biker or light coming from our headlamp. My reason for this is because the rider has light hitting him the entire time he is riding. He has to have some kind of light to see where he is riding. After all, he is on an arch only a few feet wide and 60 feet in the air. I want to expose my rider for the least amount of time as possible. The flash has frozen him but the head lamp is still casting light on him that could create a ghosting effect, which we encountered with many of our test shots. After all lights are turned off and rider is out of the frame I remove my hand once more and continue with the rest of my exposure. 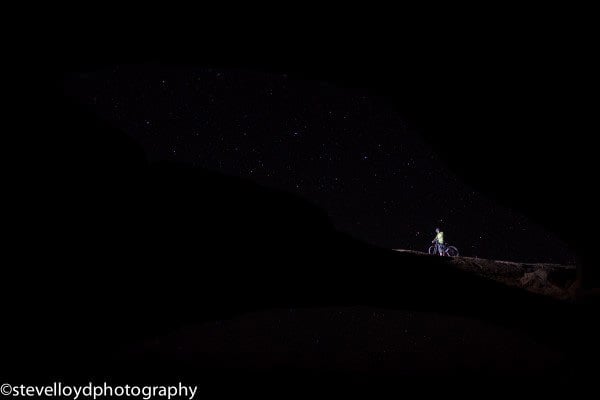 Trying these types of shots requires many test exposures. We did 30 test shots to get dialed and then 10 to 15 to get the actual photo I was happy with. From start to finish we spent six hours shooting and a few hours riding through the desert in the dark.

About the author: Steve Lloyd is an action sports photographer based in Utah. Visit his website here.

Thanks for sending in the tip, Liam!

How to Simulate Looking Through a DSLR Viewfinder

Seeing Beyond the Human Eye