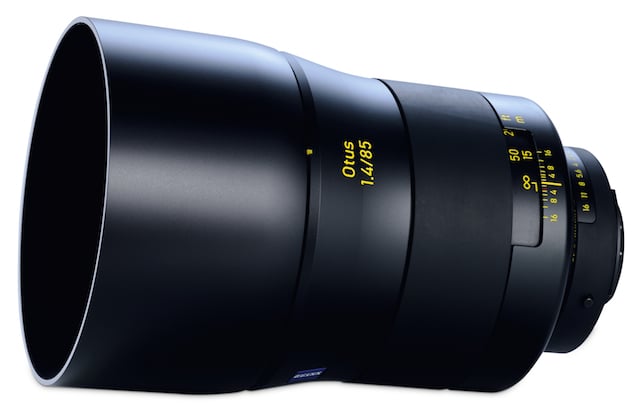 Laaaadieeesss and Gentlemennnn! I have for you the lens test to end all lens tests! Not a mere test, mind you, but an epic showdown, a clash of the titans, the ultimate cage match! Pixel peepers rejoice!

In one corner, wearing all-metal trunks in black with yellow piping, we have the Zeiss Otus 85mm, a lens so sharp the TSA banned it from carry-on luggage. A lens so sharp the state of California passed legislation requiring it ships with a warning label. Diamond cutters in Amsterdam are currently investigating ways to harness its fearsome powers.

A lens of this ground-breaking resolution makes sensor engineers wake up in the middle of the night in a cold sweat. But Sony has risen to the challenge with confidence and quiet dignity. The world’s biggest sensor maker answers the Otus with a full-frame, 36 megapixel “Low-pass filters, we don’t need no stinking low-pass filters” A7R. This camera is so powerful that it actually can steal someone’s soul.

In the other corner, we have, well, we have what I had with me at the time–a two-year-old pocket camera, the Sony RX100. Yeah. That’s right. The battery door sticks and the multi-coating on the LCD is experiencing some major exfoliation issues but worry not, this little dynamo is still in fighting trim.

Now, those of you who have read my previous post on using the RX100 as a pro camera may think, ah, ok, I guess this guy worships at the RX100 altar and he’s now trying to convert us all and pretty soon he’ll be sending his sons around to meet our daughters. The truth is a lot more benign, and even more simple. I used the RX100 because I own the RX100. It’s just one of my cameras, and also, given it’s size, the one I have with me more than any other. (Not counting my iPhone 3Gs–I’ve held out for five years in the hopes of another iPhone with rounded corners. Now I have crossed the desert, and lo, my thirst is quenched.)

So, let’s get on with the show. At the Photokina trade fair in Cologne, Germany, I walked towards the Zeiss booth, mission in mind. The only thing was, I couldn’t be sure how the Zeiss guys were going to take it. After all, I was asking to compare their newly minted masterpiece of optical engineering to a pocket camera. The line I had prepared in my defence was, “Well, it is a pocket camera with a Zeiss lens… .”

But explanations weren’t necessary. The reps I had been talking with at Zeiss throughout the show were by far the most generous, informative and candid people I talked with at Photokina. I guess that kind of attitude is easier to adopt when you are one of the undisputed kings of lens design, and part of the history of photography itself. Or perhaps they’re just super nice guys. (Or both.)

Anyway, they indulged my little stunt. Watch the video. The only thing I’ll add is that after the test, as I said goodbye to the Zeiss engineer who helped me, he said, “I hope there’s a big difference!”

I’ll leave you to be the judge of that.

Now, the moment you’ve all been waiting for. The 100-percent crops. Here they are. Both are jpegs right out of the camera, auto white balance, 100 ISO, f/5. The one from the Otus/A7R is bigger and shows less depth of field thanks to its higher resolution and physically bigger sensor.

So there you have it. Incredible resolution from the Otus, but that didn’t surprise me. Pretty damn good show by the RX100, but that didn’t surprise me either. What I find astonishing is how little difference there is between the two, considering the vast difference in size, weight, sensors and price. Sure, the A7R/Otus combination wins, but not by that much. Besides, it bloody well better win! It’s up against a two-year-old pocket camera that weighs and costs a small fraction as much. (Ignore the color differences since I didn’t bother to set precise color balance on each camera, and they’re not even in the same color space–but then again that wasn’t the point.)

I know what some of you are thinking. “You can’t expect me to take this seriously.” And well, no, actually, I don’t. Except for one thing, but I’ll get to that in a bit.

First, a question: Is this lens actually going to sell? The 85mm is brand new, so to answer that, we have to look at the 55mm Otus, a similarly huge, heavy, expensive lens that has been out for a while now. I spoke with an executive at Zeiss who has worked on the Otus project from the beginning. He said, “We have been surprised by the sales numbers. They were so strong we opened a second manufacturing line and still we have no stock. Not one of us expected it.”

Yeah, I get that. Why would anybody buy such a heavy, expensive ‘normal’ focal length lens that offers only a slight improvement over light and cheap 50mm lenses–a difference seen only when studying the images up close on a computer screen? Not even Zeiss thought many people would buy the Otus. It wasn’t even their intention. “This started as a strategic lens family just to show what Zeiss was able to do,” said my Zeiss contact. “We didn’t want to lose any money but we didn’t even have to earn money from this.” What they wanted was for you to look at a real test of the Otus, go “Wow!” and then buy a more sensible Zeiss offering, such as the Planar 85mm 1.4 — a quarter of the price, much smaller and lighter, sharp as hell, and with a metal focussing ring instead of a silly rubber one. But clearly they underestimated the fervor of the pixel peepers.

Now, let’s be clear here. I’m not trying to dissuade anybody from buying the Otus lenses. (And for the record, Zeiss is one of my favorite lens manufacturers.) Buy whatever makes you happy. Heck, buy two of each. But don’t think you have to in order to get great images. We’ve all gone a little crazy about the technical quality of digital images. It’s really the least important and most mundane aspect of a photograph. And this is where we get to the real point of this post: The quality of today’s digital cameras and lenses is not a limiting factor in your photography. Period. End of story.

It’s fun to talk about lenses, and see how they perform. But which one you use doesn’t matter in the end. What matters is getting out there and taking good pictures — hopefully, of things a lot more interesting than test targets.

About the author: Mike Randolph is a writer and photographer based in Madrid, Spain. For tips, technique and gear talk, check out his travel photography blog. You can also follow him on Twitter and Facebook. This article originally appeared here.