Don’t think too long over the answer because it’s none of the above. A pro camera is a camera that a pro uses. Period.

So the Canon EOS 1DX and the Nikon D4S are pro cameras, yes. Lots of professionals use them (well, the D4S is brand new, but you get the point). I’m willing to bet, however, that Canon and Nikon sell more of their flagship cameras to amateurs than they do to professionals, for the simple reason that there are a lot more serious amateurs in the world (and ones that have money to burn) than there are pro photographers (who generally don’t).

If you look at this a different way, I’m also willing to bet that there are more professional photographers in the world who make their livings with ‘prosumer’ cameras instead of the so-called pro models.

From a business perspective, it doesn’t always make sense to upgrade cameras every time a new model comes out, especially when the previous model is still perfectly capable. A colleague of mine runs a successful photo-tour business and tells me his clients regularly show up with more-expensive equipment than his own. The same is true everywhere, when you think about it. I have a friend who works at a major Silicon Valley company, the kind that could use $1000 dollar bills to wallpaper the offices if they felt like it. The staff is comprised of hundreds of people, all equipped with the powerful computers they need to get their jobs done. Do they upgrade to new machines every time new models come out? No, they don’t.

But economic and business considerations are sometimes besides the point. There are other more important factors that influence the decision of which camera to use. When it comes to travel photography, the first two things I look at are size and weight. I spent 20 years hauling around heavy camera bags. I wouldn’t be surprised if my right shoulder is few centimeters lower than my left one. I don’t haul heavy camera bags anymore. Not because it was causing my spine to resemble a piece of cooked spaghetti, but because it was preventing me from getting the job done.

I talked about this in a recent post, but let me reiterate a few things here. The lighter you travel, the more places you can get to. It’s really that simple. You cover more ground, and you do it faster. And it’s also much more pleasant. Naturally it’s a bonus when traveling light makes the trip more enjoyable, but when it comes to the quality of your images there are other benefits, too. Your state of mind is important when trying to be creative and there’s a big difference between arriving somewhere fresh and arriving somewhere sweaty, sore and exhausted. That is, if you even make it there.

So when the Canadian magazine Men’s Fashion recently assigned me to write and shoot a travel article on Riga, Latvia, I made a choice that some might think is a little extreme. I traveled light. Extremely light, mainly because I needed to work fast.

Magazines don’t have the unlimited budgets that some people imagine they do, and that includes the big boys as well. I remember reading once a long time ago that a National Geographic photographer spent six weeks on assignment. Then he flew back to Washington to meet with the photo editor. They went over all his images together, seeing what worked and what didn’t work. Then they sent him back for another month to re-shoot what needed to be re-shot.

Sadly, that doesn’t happen anymore. Here’s a link to a blog post by Rob Haggart, a photo editor I used to work with when he was at Outside magazine. It’s an interview with Gabriela Herman, who shoots for Conde Nast Traveler. In the piece she talks about an assignment to cover Marfa, Texas for a feature article in the magazine. The whole shoot lasted only four or five days.

I had even less time to cover Riga, Latvia. Two and a half days, to be precise. I would be on foot the whole time, except when I rented a bike to get around the (thankfully flat) city outskirts. I worked from early morning to late at night, on the go the whole time. I took only two pieces of gear. A tripod and a camera. On top of that, two spare batteries, five 16-gig SD cards, and a microfiber cloth. That’s it.

First, the tripod. For a mountaineering expedition a few years ago, I bought a Slik Sprint II tripod. It’s a cheap, lightweight four-section tripod that I made even lighter by cutting out two of the sections. (I made new feet by shaving wine corks into cone shapes, but I later found new plastic feet that fit perfectly at a Spanish hardware store. They have everything.) This reduced the height quite a bit, but also the weight.

I also ripped off the foam leg covers — I didn’t need them and you know how it goes, take care of the ounces and the pounds will take care of themselves. I also unscrewed the center post and threw it away — I never raise the center column on a tripod because once you do, you loose all the stability that three legs provide. In its place, I screwed in a plastic cap with a hole drilled in the center. I threaded a piece of 1mm Spectra cord into the hole, made a big knot so it wouldn’t pull through, and used it as a loop to which I could clip a carabiner.

When I was on the mountaineering expedition, I was shooting video for the AP with my Canon 5DII, so when I needed extra stability I hooked a carabiner to the loop and used my helmet filled with rocks as ballast. 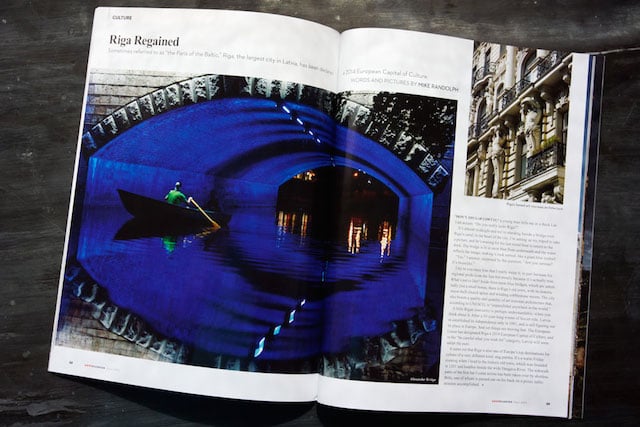 I didn’t need the extra weight in Riga thanks to the lightweight camera I selected for the shoot. So which camera did I take? Are you ready? Drum roll please…I shot the entire assignment with nothing more than a pocket camera. The Sony RX100.

The opening image ran across two pages, not a full double-page spread, but that was because of design considerations, not because the image wouldn’t have held up. (Special thanks to Art Director Eng Lau for such a great layout.) I’ve also shot a lot of images with the RX100 that are licensed by my stock agencies, and they are real sticklers for quality.

It was the first time I’ve ever shot a magazine article with a pocket camera. So what was it like? Absolutely lovely, I have to say. I headed out each day with a small, lightweight daypack that held the tripod, extra batteries and cards, and a small bottle of water. I changed the head on the tripod and added a Kirk 1″ quick release clamp, and the whole thing weighs 641 grams. I hardly noticed I had the backpack on.

The camera was either in my hand or in my jacket pocket, always at the ready. Light and fast. I walked and biked across Riga all day long and covered ground I never would have been able to otherwise. And I came home with the shots. 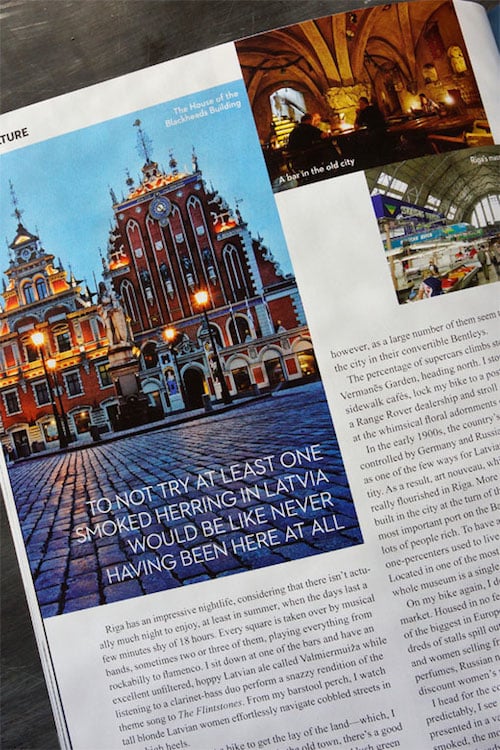 Just to be clear, what I’m trying to say here has nothing to do with specific camera models. Quite the opposite. It’s to show that you don’t need what most people think is a ‘pro’ camera to take professional-quality photographs. I don’t own a Canon EOS 1DX or a Nikon D4S because they don’t suit my style of shooting, but even if I did, I wouldn’t have taken either of them on this shoot because they’re way too big and heavy.

If I were shooting Olympic downhill skiing, well that would be another matter, but that’s a different job requiring a different tool. In this case, I chose what would get the job done. All of the images in this post were taken with the RX100. That’s how I make money, by taking pictures and writing articles. For this assignment I used a Sony RX100. So I guess that means the Sony RX100 is a pro camera.

The fact my spine is a little straighter than it used to be is just a bonus.

About the author: Mike Randolph is a writer and photographer based in Madrid, Spain. For tips, technique and gear talk, check out his travel photography blog. You can also follow him on Twitter and Google+. This article originally appeared here.

Lomography Unveils the LC-A 120: ‘The World’s Most Compact Fully-Automatic 120 Camera’

The Selfie Brush: New Heights for the Brush Industry, New Lows for Humanity