FLIR recently decided to show off some of its latest camera technology in the best possible way: with some help from a Formula 1 car. FLIR teamed up with Red Bull Racing to film its RB8 F1 car searing the pavement at the TT Circuit Assen in the Netherlands using their FLIR X6580sc alongside a number of other cameras.

As the above video shows, peeling out in one of these open-wheeled beasts is quite literally a hot mess.

Just feet behind the driver, the engine and exhaust glows from the incredible amount of heat it’s giving off. And any power that isn’t converted to heat by the engine is going straight to the two rear Pirelli P Zero tires, which are producing enough heat and friction to melt the tire to the track while flinging red-hot rubber bits across the asphalt. 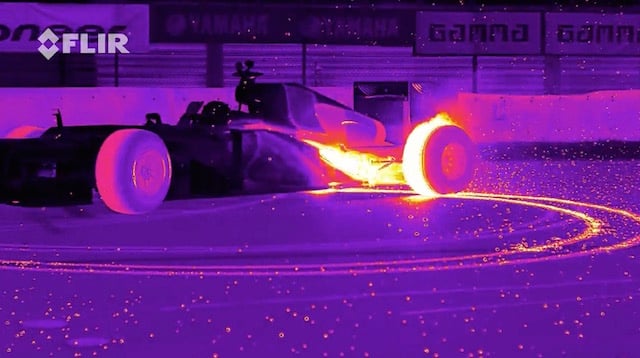 It’s worth noting that pairing infrared cameras with racing is not new. Formula 1 cars are constantly monitored by these heat-mapping cameras to better understand how certain conditions and components impact the performance of these cars on the track.

However, it’s not often you see it done simply for the sake of a few donuts… although, for the life of us, we can’t figure out why not after watching the video at the top.