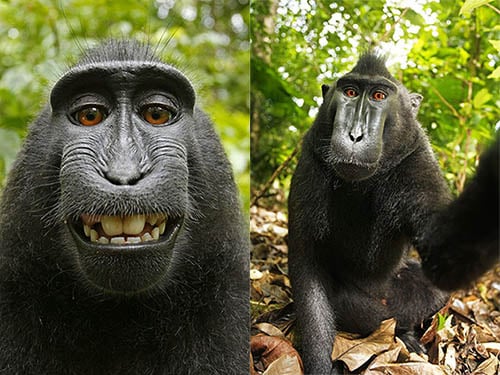 The controversy surrounding the monkey selfies above, which were taken by an endangered crested black macaque using photographer David Slater‘s equipment, is heating up once again as Wikipedia parent Wikimedia refuses to remove the photo from its commons library, claiming that Slater does not own the copyright.

This is a battle that has gone on for some time between Slater/Caters (who licensed the photo for him) and the Internet as a whole. In 2011, we told you about how the blog TechDirt had received a takedown request from Caters, claiming that they were violating Slater’s copyright by using the photo in, ironically enough, an article that questioned Slater’s claim over the photo given the strange circumstances.

But that particular dispute won’t have nearly the impact that this one is having. Wikimedia has several of the selfies up in the Commons, all marked as Public Domain, and Slater seems to be preparing for a legal battle over this.

“If the monkey took it, it owns copyright, not me, that’s their basic argument. What they don’t realise is that it needs a court to decide that,” he told the The Telegraph. “I’ve told them it’s not public domain, they’ve got no right to say that it’s public domain. A monkey pressed the button, but I did all the setting up.”

Whether or not the letter of the law agrees with Slater’s claim is up for debate, but one thing is certain: he’s missed out on a lot of potential licensing fees thanks in large part to the photo being uploaded to the Commons.

And now he’s looking at spending somewhere in the vicinity of £10,000 (~$16,800 USD) to take the case to court. What would you do if you were in his shoes? Let us know in the comments down below.

Correction: The original version of this post said that Wikimedia claimed the monkey owned the copyright for this photo. That was incorrect. They simply disagree with Mr. Slater’s claim that HE is the owner. The text has been corrected to reflect this fact.

Tutorial: How to Quickly and Easily Create the Dolly/Hitchcock Zoom in Your Time-Lapses