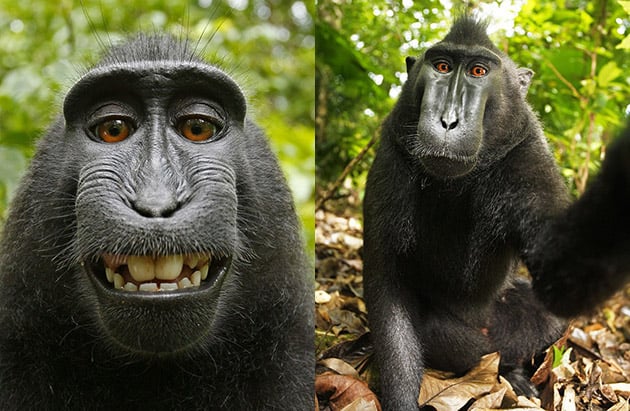 Remember that copyright controversy last year between photographer David Slater and the money that took selfies with Slater’s camera back in 2011? PETA is joining in on the fracas.

The animal rights group filed a lawsuit yesterday on behalf of the monkey, a 6-year-old macaque in Indonesia named Naruto. PETA argues that Naruto is the legal copyright owner of the photos (seen above) rather than Slater, and that all proceeds from the photos should be used for the benefit of the monkey.

This story started and exploded back in August 2014 when Wikipedia posted and refused to take down the monkey selfie, arguing that Slater didn’t own the copyright since the monkey snapped the photo. Since the US Copyright Office doesn’t register copyright to animals, the photo was in the public domain, Wikipedia argued.

Slater disagreed, and said then that he was planning to go after Wikipedia over the photos.

Now PETA is taking the battle to court on Naruto’s behalf, filing a federal lawsuit in San Francisco to make sure the monkey gets paid. The group is arguing that the US Copyright Office’s decision to exclude animals from its system is not set in stone, but is rather “only an opinion.”

“The act grants copyright to authors of original works, with no limit on species,” PETA lawyer Jeffrey Kerr tells the Associated Press. “Copyright law is clear: It’s not the person who owns the camera, it’s the being who took the photograph.”

Slater, who already obtained a copyright for the photo in the UK, objects. He believes he and his family have a right to make money from the photos snapped by Naruto.

“The facts are that I was the intellect behind the photos, I set the whole thing up,” he tells the AP. “A monkey only pressed a button of a camera set up on a tripod – a tripod I positioned and held throughout the shoot.”

If PETA ends up winning this legal battle — something that seems unlikely to happen — then this could be a landmark case that extends animal rights to the world of copyright law.

Apple Selected the PetaPixel Photography Podcast as ‘New and Noteworthy’