The video above is not for the faint of heart. Heck, even the not-so-faint of heart will probably have trouble with it. A FAKE (not sure how much more we could emphasize this) tutorial, it shows you ‘how to clean your 5D Mark II and lens’ … and by clean we mean destroy.

He starts by submerging the camera and lens completely in water, and then, in case your eyes haven’t popped completely out of your head and you haven’t gone hoarse yelling at the computer screen just yet, he pours some dish soap in there and proceeds to vigorously scrub the inside of the camera with his finger.

Finally, he then takes a spray hose, sticks the nozzle right up next to the sensor, and sprays it full blast. 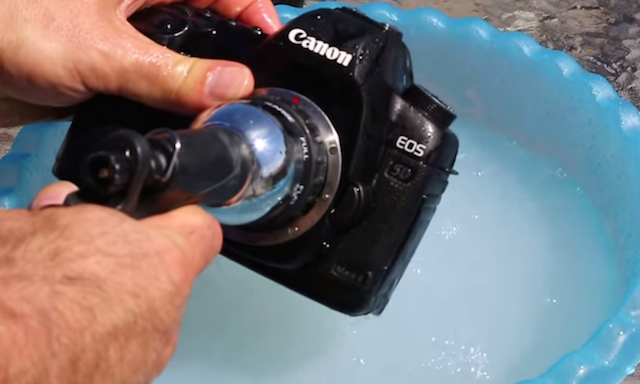 It’s like watching a photographic car wreck. You know it’s happening, you know it’s terrible, and you’re horrified… but you just can’t look away.

And while it goes without saying, we’re going to say this here in case anybody who actually thought the iOS 7 update made your iPhone waterproof is reading this: THIS IS A FAKE TUTORIAL. From start to finish, doing anything resembling this to your camera will very likely destroy it.

Now go give your DSLR a hug.

(via No Film School)

Google Maps is Officially Out of This World, Will Let You Explore the Moon and Mars