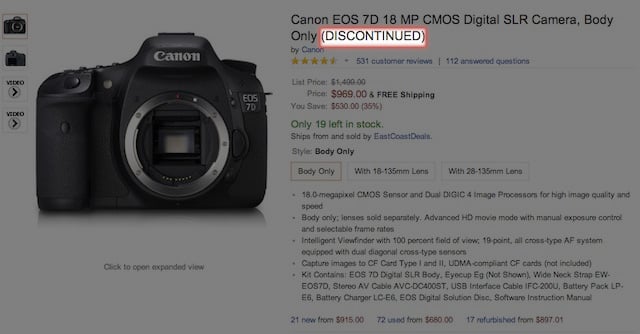 There are plenty of reliable rumors from trusted sources claiming that the 7D Mark II (if that’s even what it’ll be called) will finally be arriving sometime in early September, but those rumors are now being bolstered by another piece of news.

Amazon has officially marked the camera as ‘Discontinued’ and stopped stocking and shipping it themselves. It’s still available from third party retailers, and B&H Photo still has it marked as in stock, but this move by Amazon definitely lens credence to the idea that a new flagship APS-C shooter from Canon is right around the corner.

Check out our previous coverage of all the 7D Mark II rumors to find out what you can expect from the official announcement, and if you’re in the market for a 7D, we suggest you order soon before they’re all out of stock.