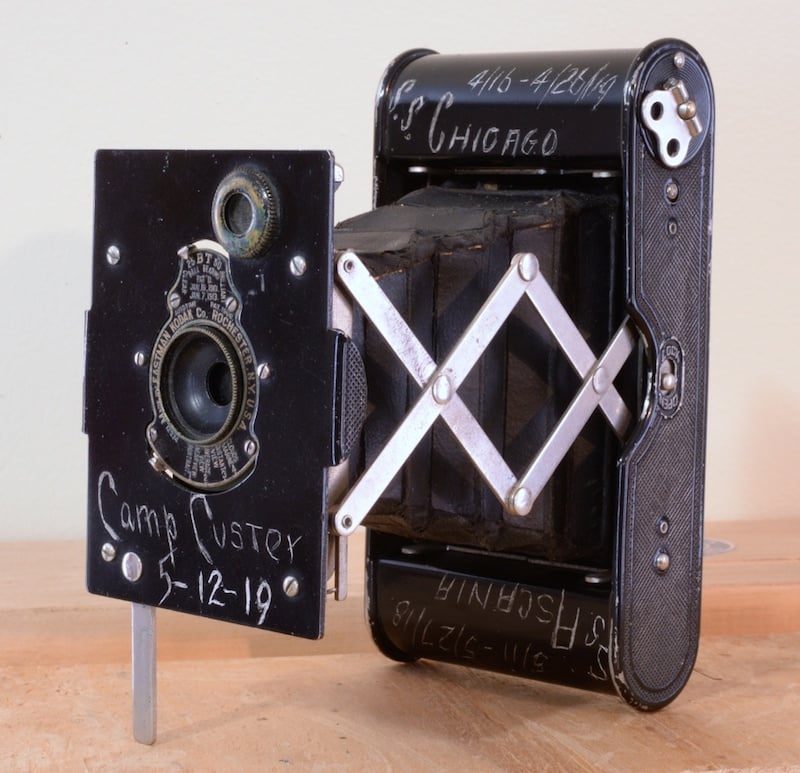 It took a while to sort through this camera’s history. What did it see? What images might it have captured? What journey could this camera have taken?

All I had was some etched locations and dates. There wasn’t even a roll of film inside the little Kodak.

But, in all honesty, those etched dates might have contained all the information I needed. 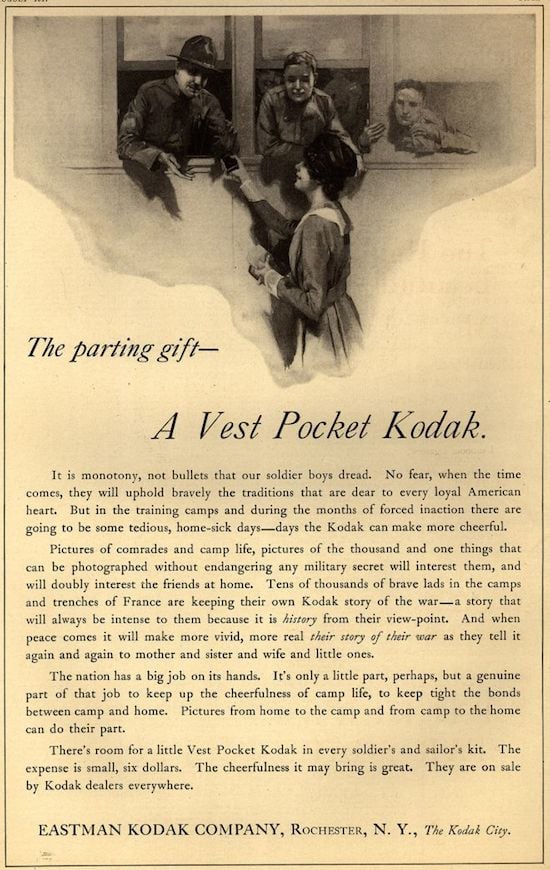 From 1912 to 1926, Kodak produced a small, portable camera called the Vest Pocket Autographic. It was nicknamed the “soldier’s camera,” in that millions of these little treasures were used by soldiers and sailors who participated in what was then known as The Great War. The War to End War, shall we say. A war that we now call World War I. Kodak sold nearly two million of these cameras, and you can still find them on eBay today.

The camera came with a special engraving scribe pencil. The original “Autographic” film contained carbon tissue paper, allowing the photographer to write information directly on the film. The Autographic technology was clunky and complicated; if the soldiers used the scribe pencil at all, it was used to engrave the soldier’s name on the paint’s chassis.

And here comes Camera number 706753, according to the serial number on the camera’s foldout post. It has shutter speed settings of 1:50, 1:25, T and B, and its f/stops are descriptions of viewing conditions like “Clouds Marine”, “Distant View,” “Average View” and “Near View Portrait.” According to this website, some of the most famous locations the Vest Pocket Autographic Kodak cameras have seen included a trip to Mount Everest, a journey through the South Pole, and in the cockpit of the Spirit of St. Louis. 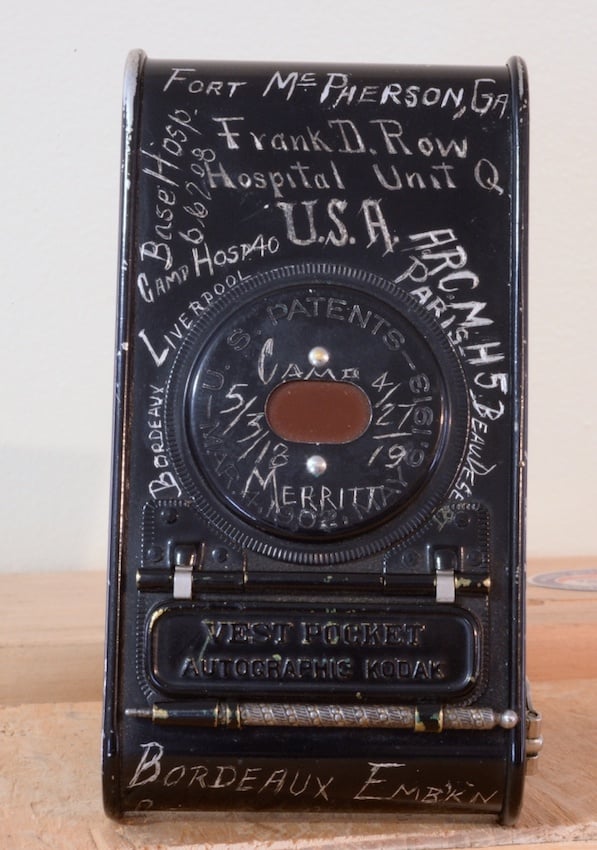 This particular camera was manufactured at the Kodak plant in Rochester, New York, and was later purchased by Frank D. Row, from Grand Rapids, Michigan. According to this website, Row may have been one of several Kent County residents to help establish a military hospital in France. From the website:

The American Red Cross of Greater Grand Rapids, then called the American Red Cross of Kent County, was established in 1917 in response to a telegram from Washington, D.C. asking Grand Rapids citizens to assist in the war effort. The chapter’s initial task was to launch a base hospital in Auteuil, France. By the end of World War I, twelve medical officers, 21 nurses, and more than 50 enlisted men, ambulance drivers, and assistants from West Michigan helped the hospital grow from 300 beds to 2,400 beds. These volunteers provided care to 10,478 Allied soldiers.

More information can be found from this online link to the biography of Summer Merrill Wells, Jr., who may have served alongside Frank D. Row.

During World War I, Wells served in the Red Cross Hospital Unit Q. Unit Q was formed by the Grand Rapids chapter of the Red Cross, which raised close to $90,000 for its outfit. The majority of the unit’s personnel–doctors, nurses, and enlisted men–hailed from Michigan, many came from the western part of the state. By December 1917, the unit mobilized at Ft. McPherson, Georgia, to train for duty in Europe. Called up the following May, Unit Q left from New York, arrived in England, and was located at Knotty Ash, a hospital camp outside Liverpool. In June 1918, the unit relocated to the American Red Cross Military Hospital (ARCMH) #5 on the Auteil horse racing course near Paris, France. Housed in tents, the hospital could be loaded on trucks and moved within a few hours. ARCMH #5 was the largest of its kind in France and at times cared for as many 2,400 patients. In January 1919 Unit Q moved to Bordeaux to form part of Base Hospital #208. During the next month the Unit began to demobilize. Some personnel returned to the United States and others transferred to Germany or Romania. 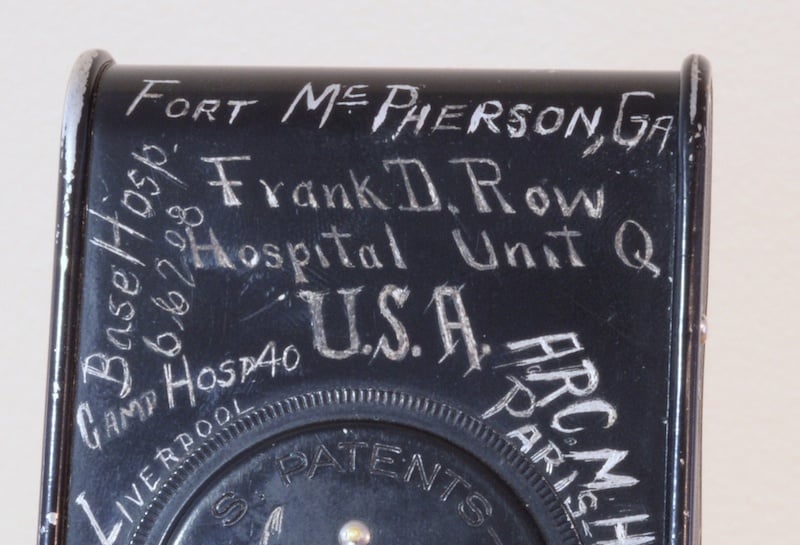 And lo and behold, many of the etchings on the camera — “Fort McPherson, Ga.”, “Hospital Unit Q”, “ARCMH 5,” are all consistent with the above-mentioned research. All scratched in with that tiny pointed scribe pencil on the Kodak camera chassis. 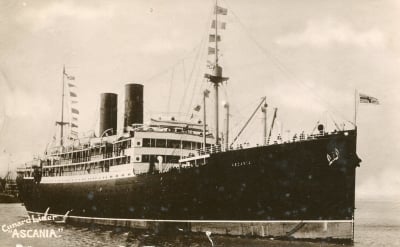 The etching with the most detail, however, is probably the first one on the camera. You can see the name “Frank D. Row”, along with “Hospital Unit Q” and “U.S.A.,” all carefully carved and scraped and etched into the camera back, all engraved in the largest flat area the camera provided. He even added serifs and periods to the letters “U.S.A.” As the camera traveled through the theater of war, more names and locations were etched in whatever flat space the camera provided. Around the camera’s curves? On its faceplate? If it could be etched, it was etched. Serifs and fonts were replaced with whatever etchings could be done quickly and conveniently.

Thanks to one of the engravings, we know that from May 11 to May 21, the camera traveled on the Ascania. The R.M.S. Ascania was originally built in 1911 for the Cunard line, and sailed from Canada to England and back every two weeks. The Ascania‘s normal cargo were Canadian soldiers, who were on their way to France to fight for King and Country. In May 1918, the Ascania carried the U.S. 119th infantry from Hoboken to Liverpool. On May 26, the Ascania suffered damage from a German submarine attack; but was still able to make it to Liverpool on May 27, 1918.

There’s also an engraving of “S.S. Chicago.” There was a transport ship by that name; it was part of a convoy near Floamborough Head in England, when it was sunk by a German torpedo on July 8, 1918. Three men died in that attack; I don’t have enough information handy as to whether Frank D. Row was either on the ship, or whether he knew anybody from that ship.

The camera rear says “Camp Merritt, 5/3/18, 4/27/19.” Camp Merritt in New Jersey was the point where tens of thousands of soldiers were stationed before they traveled across the Atlantic Ocean to the theater of war. The soldier must have spent at least part of May 1918 at Camp Merritt; and made his way back from the theater of war in April of 1919. 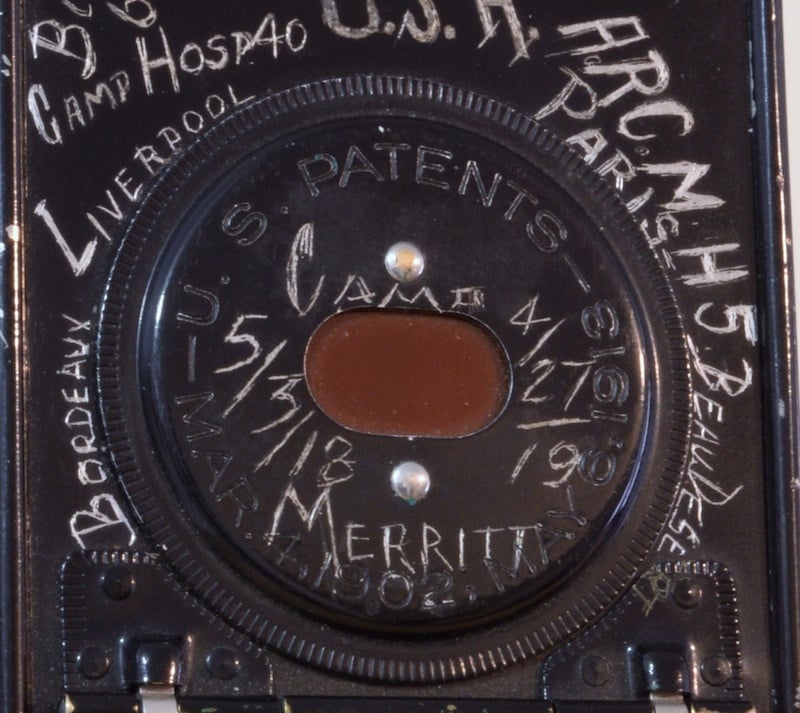 Look at the right side of the camera’s backplate — just along the perimeter of the red window — and you can make out the word “BeauDesert.” Beau Désert, approximately five miles away from Bordeaux in the Gironde region of France, became a 20,000-bed Army hospital to treat the wounded and the injured. Unfortunately, in the Second World War, Beau Désert became a notorious internment camp. The facilities and buildings are gone today; only curved roads and fast-food restaurants mark the locations of war.

Frank D. Row and his camera then traveled to Bordeaux, to the evacuation camp known as Camp Genicart. There are dates on the camera from 1919, chronicling the location where he and his fellow soldiers were disinfected, deloused, debriefed and detailed for their home journey.

There’s another date on the camera, right on the faceplate. “Camp Custer, 5-12-19.” Camp Custer, based in Kalamazoo, Michigan, was named after the legendary Civil War general George Armstrong Custer. The camp was built in 1917 as a training camp for the 85th Division; by 1919, when the camera owner arrived, the camp was a demobilization center. That’s the final date on the camera; it — and Frank D. Row — made it home. 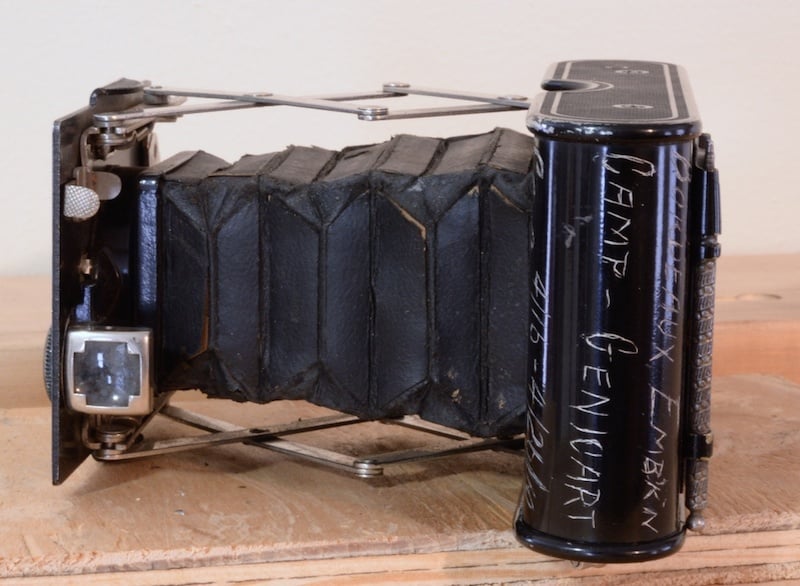 As for Frank D. Row, he lived a full life. After he served his country, he followed in the family business, establishing F. Damon Row Insurance in Grand Rapids. After a long and successful career as an insurance salesman, Frank D. Row passed away in October 22, 1966.

For nearly fifty years after his passing, this camera traveled on its own journey, to who knows where or who knows why. Its beautiful black bellows developed pinpricks and holes. This photographic soldier’s shooting days are over. Somehow, the camera traveled to a town between Dallas and Fort Worth, where the eBay seller there sold the camera to me last week.

And you know what? It deserves more than just a place on my camera shelf.

This camera belongs back with its unit. Specifically, as soon as I make contact with the organization, I’m shipping it to the Grand Rapids chapter of the American Red Cross. It’s part of their history and it’s part of their heritage. It’s because of men like Frank D. Row, that the American Red Cross of Kent County organized and helped establish a medical facility in the theater of war; a medical facility that assisted thousands of injured soldiers on the battlefields of France.

There’s probably more stories that this camera can tell.

Let the camera’s last story be its journey home.

About the author: Chuck Miller is an award-winning writer and photographer from Albany, New York, who never lets a camera’s age stop him from making it take photos once again. He chronicles his photo experiments on his popular newspaper blog, and a gallery of his work can be found on his Flickr site. This article originally appeared here.