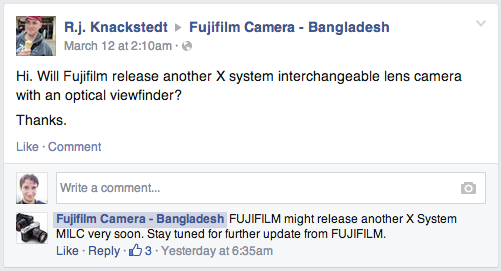 It seems it was only yesterday that Fuji announced the release of the much-lauded X-T1 — heck, it only started shipping last month — but the company might have another mirrorless camera in the works already.

In response to a question posed on the Fujifilm Camera – Bangladesh Facebook page, an admin revealed that “FUJIFILM might release another X System MILC very soon,” and told people to stay tuned for updates.

We would take the response with a grain of salt; after all, they did use the word “might” in there and Fujifilm Bangladesh isn’t exactly the largest branch of the company. But Fuji Rumors thinks this might be referring to a minor update to the X-Pro1 that they’ve dubbed the X-Pro1S.

Stay tuned and we’ll be sure to update you if and when more info comes in.