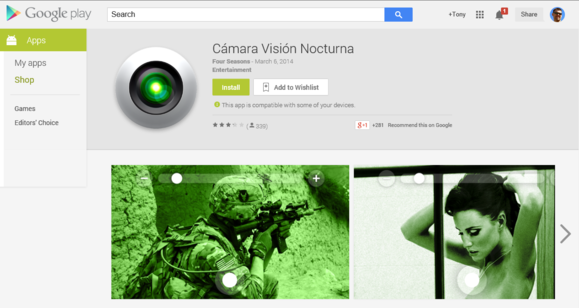 With 98% of mobile malware being directed towards the Android operating system, it’s no surprise that the Google Play Store contains more than a few insidious applications that intend to do you harm.

The most recent of these to make headlines is an app uncovered by AVAST, which hides behind the thin facade of a night vision camera app and does its best to empty out your wallet.

Called Cámara Visión Nocturna — Spanish for “Night Vision Camera” — the “camera” app (which looks to have been taken down) asks to make use of some suspicious permissions upon downloading it, giving it access to messaging apps, such as ChatOn and WhatsApp.

From there, AVAST says it sends the numbers from those apps to its servers, where it secretly signs you up for a suspicious SMS service, for the low price of $2.80. That’s only the beginning though. Once signed up it’ll continue sending out messages without your knowing, bringing the total bill up to $50 per month.

This isn’t exactly an isolated incident on the Google Play Store, nor does it mean other mobile operating system are safer — as iOS’ latest security flaw points out — but it does go to show that you should do your research before purchasing an interesting app… you never know what it may be doing behind the scenes.

Overall, just be aware of what you’re downloading and pay particular attention to what permissions it’s asking for. Android tends to be much more lenient on that end, but it can happen on any system.

(via AVAST via PC World)

BTS: Ultra-Stable MoVI Footage Shot While Flying Through the Air on Skis

Light Painter Puts the Lumia 1020 Through Its Paces, Shows You How to Do It Too