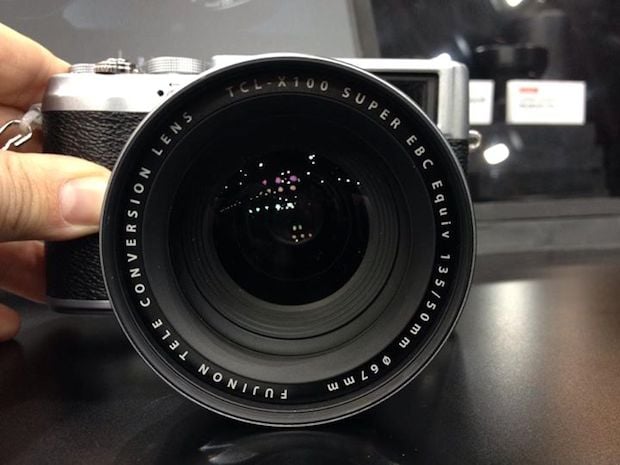 CP+ is throwing quite a bit of gear news our way, and one find that caught our eye has to do with the immensely popular Fujifilm X100s and its older sibling the X100. According to Patrick over at Fuji Rumors, X100/s users will soon be able to extend their fixed lens’ reach to 50mm (35mm equivalent).

The converter, which apparently turns the 35mm equivalent lens on the Fuji into a 50mm equivalent, was first spotted by Fuji X photographer Gianluca Colla, who sent the above picture to Fuji Rumors (who, subsequently, was kind enough to let us share it with you).

Soon after, the discovery was substantiated when Fujifilm UK posted the photo below to Twitter:

Meet the new Tele Conversion Lens for the X100/X100S that turns the fixed 23mm into 35mm (50mm equiv) pic.twitter.com/fqcOuCbjfl

You’ll have to look long and hard to find a professional who has a bad thing to say about the X100s; and what’s more, all the pros singing this camera’s praises (eg. David Hobby) are phenomenal photographers with sparkling reputations. You can’t help but come to the conclusion that this camera really is the bee’s knees.

And now that you can go both farther and wider depending on your needs — the WCL-X100 converter can already turn the 35mm equivalent lens on the X100/s into a wider 28mm equivalent — this already popular camera is becoming quite versatile.