Just when you thought you’d seen it all… Excuse me for a moment while I climb atop my soap box. *Taps Mic* Check? Is this thing on? Okay. 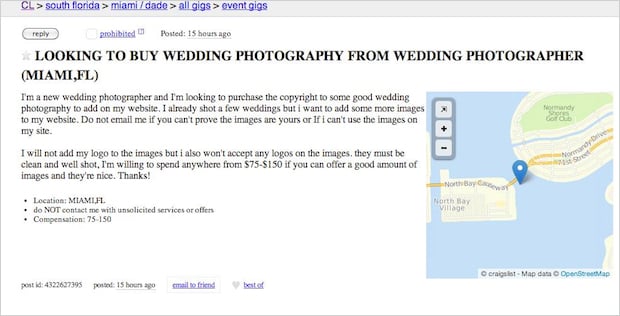 This was sent to me by a friend this morning and, after I opened it, I just sat staring at it. I could see it was a Craigslist ad, that much was evident, but I had to keep reading it over and over because the words just would not register. I knew they were English, and complete sentences were formed, but what it was asking went beyond my means of comprehension.

At first, I thought it was a joke. Then I realized, it wasn’t. Then I said a very very bad word.

What in the world is going on here!?

Has our beloved photography industry fallen into some sort of alternate reality akin to “The Twilight Zone?” I quite often feel like little David, whose ride home from the dentist went viral on YouTube as he asks, “Is this real life?” We have reached a point in our industry where reality has merged with something off SNL.

And we have ourselves to blame for this. We saw the pendulum swinging and we should have seen where it was headed. We sat back in workshops and listened to photographers turned motivational speakers tell us that it’s easy; that with their help we could follow our dreams. We saw the shortcuts to success fly off the shelves. We watched hordes of photographers make money off the masses by selling the dream, and we did nothing.

Sure, some of us raised our hand and questioned the insanity that was being peddled to naive individuals, but many lowered their hands just as quickly when they were assigned unflattering labels such as: negative, Old School or cranky.

And we lowered our hands and our voices to the peril of an industry. We stopped demanding accountability, because of those that told us just to “mind our own businesses.” We were reprimanded and told to “focus on yourself and not others.” We were labeled “haters” when we spoke up and insisted that those peddling the label of “professional photographer” actually create businesses worthy of the title.

And when we did that, when we allowed ourselves to be silenced, you know what happened…THIS! (Here’s a blown up version in case you couldn’t read the text at the top)

Why? Because they are not worthy of it.

This incredible industry many of us have been privileged to work in all our lives has been sullied by the likes of folks who could care less about it. In much the same way Homer Simpson views popcorn as simply the delivery system for the butter, they view photography as the delivery system to fast money and appearance of fame and celebrity.

In order to be worthy of something precious, you have to take care of it, love it, go out of your way before you allow harm to befall it. You have to honor it. And you have to speak up for it.

So, the question becomes, are we too far gone to come back from this? Have we reached a point of no return where “I’m a photographer” is now a punchline for a very poor joke?

I don’t believe that, not for a minute, because a pendulum is capable of swinging both ways. And once it’s gone as far left as it can, there’s only one place for it to go … and that’s back toward the middle. But the pendulum needs a push. It needs thousands of hands that are willing to guide it back where it belongs.

I, for one, am proud to push the pendulum. I hope you join me.

(Note: If you read this column and rolled your eyes at how preachy it is, I’m totally good with that.)

InMyBag: A Website for Showing Off Your Gear and Exacerbating Your G.A.S.