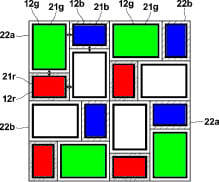 One of the things you kind of take for granted with a digital camera sensor is that every pixel is the same size, but Fujifilm may turn that idea on its head with a new RGBW sensor design that uses bigger pixels for white and green frequencies.

The camera maker describes the design in a patent application filed with the Japanese government in June 2012 and published last month.

The application is a little hard to read via Google translation, but the basic idea seems to be that since the human eye is more sensitive to green and white frequencies, you emphasize those in the sensor pattern. The end result should be less noise and better color reproduction. Or for the tech-inclined, you swap some extra chrominance noise for less luminance noise. This wouldn’t be the first time Fuji has shaken up the sensor world. The company’s much-loved X-Trans CMOS sensor design (above) uses an irregular RGB pattern to eliminate moire without the need for an anti-aliasing filter.

Of course, this is just a patent, so there’s no word on if or when this design might show up in a camera, but you have to give Fuji points for originality.

(via Egami via Image Sensors World)