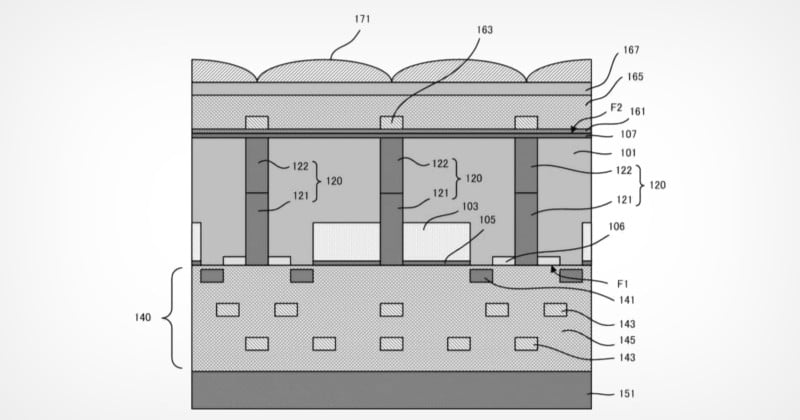 Canon has patented a new sensor design that mimics the design of backside-illuminated (BSI) sensors made by Sony. Mixing Dual Pixel with BSI would likely result in huge leaps in low light performance, dynamic range, and readout speeds.

The design illustrated in Canon’s patent application does not specifically state that it would be a backside-illuminated, but when compared to a figure of a BSI sensor, the similarities are impossible to ignore.

In the illustration below from Sony, the company shows how a BSI is constructed: 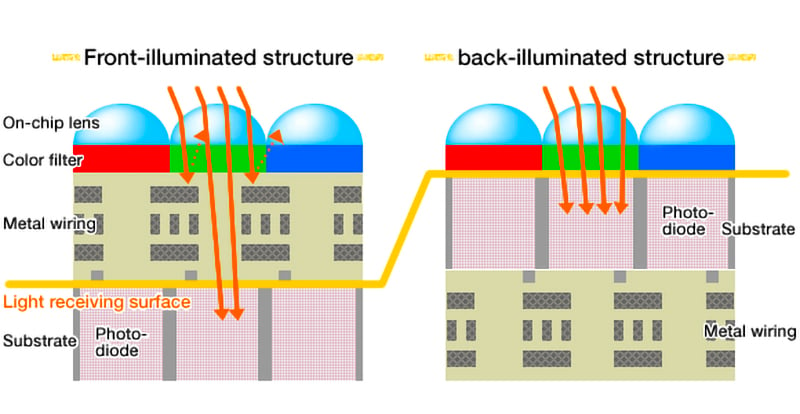 Sony developed this type of CMOS sensor back in 2008. Reports that Canon has been attempting a design like this go back as far as January of 2019, but a Dual Pixel BSI were only mentioned, not truly depicted in detail like is seen in this patent.

Basically, rather than constructing a sensor akin to how the human eye works – which places the lens in front of the wiring, with photodetectors in the back – a BSI uses the same elements but rearranges them so that the photodiode can exist in front of the wiring. With the typical frontside illumination method, the matrix and the wiring reflect some light which reduces the signal that is able to be captured. BSI sensors alleviate this at the cost of worse response uniformity but gain far better low light performance.

BSI sensors have become the norm for improving low light performance (and improving dynamic range), but they have an additional benefit of a boost to readout speeds. The reason the Sony a9 is capable of firing so many frames per second in a fully electronic, silent, blackout-free mode is in part thanks to the benefits of the stacked BSI-CMOS it is equipped with. Sony does have additional technology that pulls information off the sensor twice as fast as competitors, but the benefits of the BSI sensor can’t be fully disregarded here. 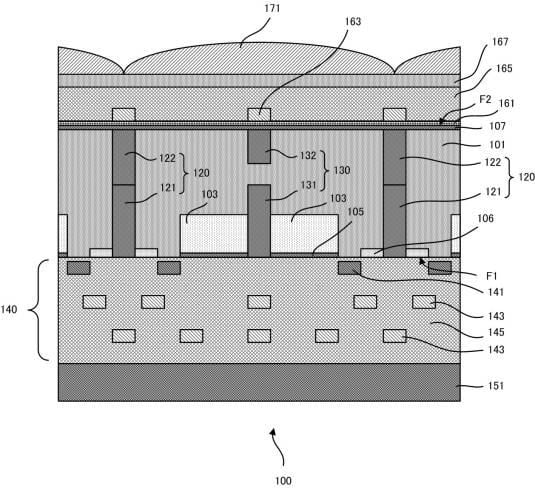 Looking more closely at Canon’s patent, the structure depicted is strikingly similar to a BSI diagram.

That’s a lot of words for basically saying that this is a method that is not only easier to produce but allows the sensor to take in more light more effectively on a pixel-by-pixel basis as well as notably on a full array. The resulting sensor has approximately the same visible structure as a BSI sensor.

Canon is one of the only companies that is not using Sony sensor technology in its cameras, hence why a BSI in a Canon camera has yet to happen.

Even without BSI sensors, Canon has already dramatically improved the dynamic range and low light performance of its cameras as seen in the R5 and R6. What the company could do with this latest patent tech opens the door wide for true competition with the industry leader. Combining Canon’s Dual Pixel autofocus technology with a backside-illuminated design would result in a sensor that may finally be able to stand toe-to-toe with Sony’s best. Such a sensor design would be critically important to producing a low-light leader like the a7S III or a mirrorless sports camera like the a9.

My Journey in Photographing Nudes