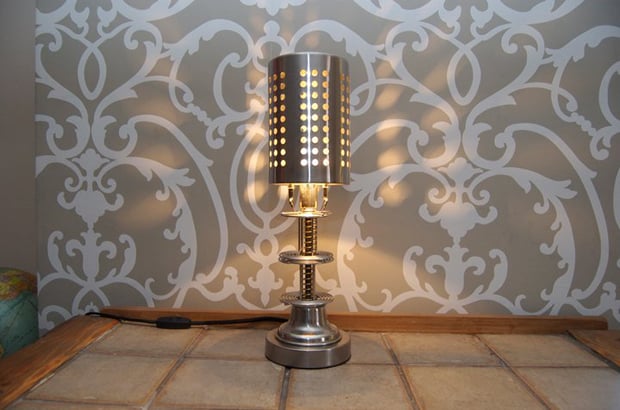 You, of course, are an analog purist who will forever be devoted to film. Other folks, however, may be wondering what they’re going to do with a bunch of darkroom equipment that’s getting lonelier by the year.

A new suggestion comes from Jonas Bouchard, a Quebec artist/designer who specialize in making novel table lamps out of recycled objects. Previous designs have utilized everything from antique kitchenware to an old steam iron.

For the “Petite Geoff,” however, somebody obviously raided a dusty darkroom. Your guess is as good as ours on the other parts (especially with all descriptions en francaise), but anyone who ever got nauseous from inhaling hypo fumes will recognize the base as a stack of metal film developing reels. (The Facebook description says 35mm, but others are guessing 120 film.)

The lamp appears to have already been sold, judging from Bouchard’s Etsy site. But nothing’s preventing you from combining inspiration, old photo gear and a can-do attitude into your own work of useful art.

Video Demonstrates the Stabilization Magic of a Brushless Gimbal Rig