There’s no doubt the ubiquity of fake and mis-reported content on the Internet has turned many of us into big-time skeptics. Whenever we see something that seems incredible or outlandish, our knee-jerk reaction is to call it fake and begin searching for evidence of that fact, using our confirmation bias as a guide.

One video that elicited such a response from many of the people that saw it was this recent Sony ad that showed an a7R lens change happening in mid-air during a skydive.

As it turns out, the footage was actually 100% real. Filmed by Simon Hammond and Cutting Edge, the behind the scenes video above gives us a peek at how the mid-air, slow motion, 4K video was captured over the course of nine jumps. 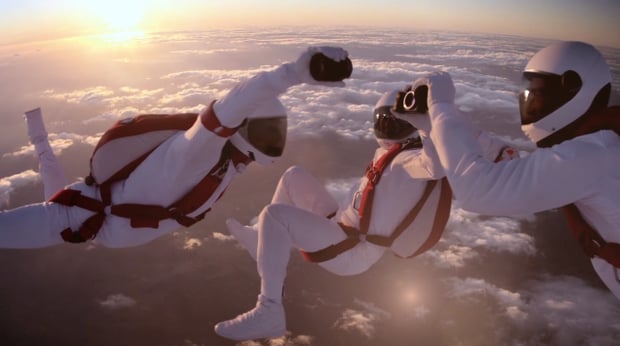 In all, they had two days to perform the nine skydives that would need to contain every single bit of footage required for the aerial shots. That amounts to about 9 total minutes of shooting time.

Of course, even the BTS video won’t turn skeptics off, but as Rob Douthat — one of the Aerial DOPs for the commercial — tells ISO 1200, he’s not worried:

I have been pretty amused at the comments on the A7R skydive commercial. The BTS Vimeo link gives some of it away. I laugh my guts out at the armchair experts who speculate what is “FAKE”. You don’t see every trick of the skydiving cinematographer trade and the multiple times we shot different views so the haters will never be satisfied . And to be truthful I’m not overly worried either… When you use the best people for the job you can do amazing things.

I actually did 3 test jumps the week prior changing a camera lens while in free fall so I can tell you 100% for sure it can be done.

To read more of what he had to say, head over to ISO 1200 by clicking here. Otherwise check out the video at the top and then stop by the Cutting Edge website to see more of their phenomenal work.

Google Maps Out the Most Photographed Places in the World

Reuters Under Severe Scrutiny in Wake of Teenaged Photog’s Death