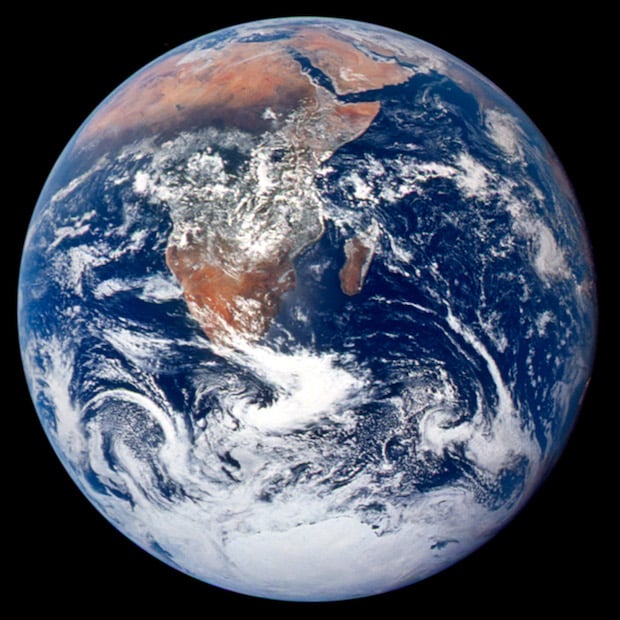 Backlighting can be all moody and subtle, but you can seldom go wrong with full-on, straight-behind illumination. Especially if your subject is the planet on which your family, friends and all of humanity happens to reside.

That’s what the trio of Apollo 17 astronauts — and soon, the whole world — discovered 41 years and two days ago today. Navigating towards the moon on Dec. 7, 1972,  the spacecraft had the sun behind it, providing a rare, fully illuminated view of the Earth.

The crew snapped a series of spectacular photos with its NASA-issue Hasselblad 70mm, and one of the images — nicknamed the “Blue Marble” for what it reminded the astronauts of — quickly became the defining view of our place in the universe.

NASA photograph AS17-148-22727 went on to grace everything from coffee mugs to dorm-room posters, and became a unifying symbol for the nascent environmental movement.

NASA and other space exploration agencies have gone on to capture even more detailed images of our orb, but it’s safe to say that none have had the impact and the spread of the 1972 photo, credited by some as the most widely distributed photo ever.

Here, by the way, is the caption that accompanied the original release of the image:

Note the heavy cloud cover in the Southern Hemisphere. Almost the entire coastline of Africa is clearly visible. The Arabian Peninsula can be seen at the northeastern edge of Africa. The large island off the coast of Africa is the Malagasy Republic. The Asian mainland is on the horizon toward the northeast.