Here’s a whimsical way to start off your weekend. In a followup to a similar video he created a couple of years ago, Peter Simon (better known as Petey Boy) has put together a stop motion film in which his willing model is treated to all manner of hairdo, beard and mustache combinations courtesy of a stylus pen.

The video is called Ballpoint Barber, and it stars Simon’s friend Tom Offer-Westort — who apparently spent two years regrowing the hair he lost in the first video, only to shave it all off again in the name of stop-motion.

Unlike the first video, this entire stop-motion adventure happens through printed pictures set on a table. That way, the hair can be removed and/or added in by the interactive hand holding the “magic” pen. According to Simon, it took 300 printed pages to make it happen. 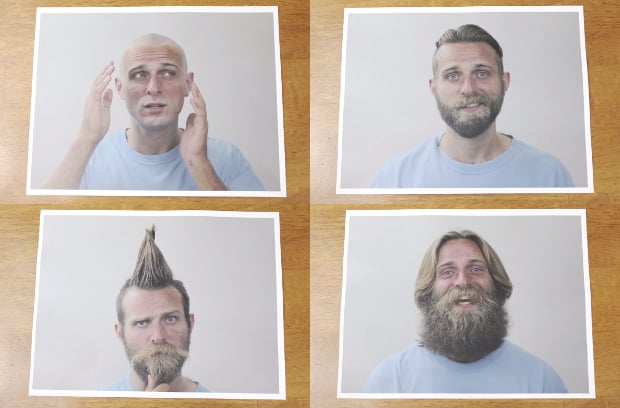 The whole thing starts with Offer-Westort having all his hair literally shaken off, after which Simon has his hair-stylist/hand-model get to work painting it back on in creative strokes.

As the video progresses, Offer-Westort transforms into versions of himself that look like everything from a biker gang member, to a rocker with a mohawk, to a full-on mountain man with a beard to rival the men of the Robertson family on Duck Dynasty.

Take a gander at the video at the top to see the transformation for yourself, and if you want to see how it was photographed and put together behind the scenes, don’t neglect to check out the BTS time-lapse below:

P.S. If this video got you in the mood for more crazy hair experiments, be sure to check out photographer Greg Anderson’s quirky portraits from the National Beard and Mustache Championship.