A couple of weeks ago, Seattle-based production group Super Frog Saves Tokyo took the Internet by storm with their slow-motion photo booth footage from a recent wedding they shot. Now they’re back by popular demand to share some of the specifics about how they set up their slow-motion experience.

The technical details we already shared, but they bear repeating. SFST used a RED Epic worth some 40K, an 18-50mm RED lens, four Konova 900 LED lights and a white background. As far as the organization goes, the final setup looked something like this: 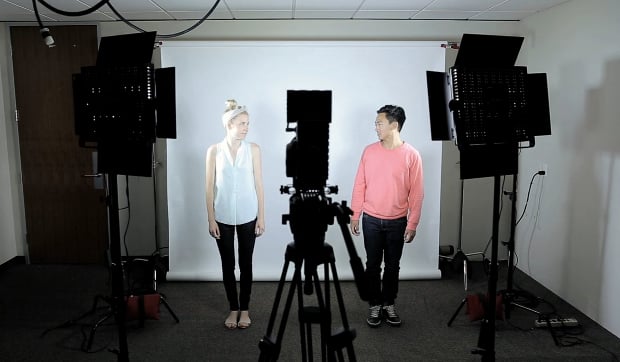 As you can see, you have two side lights, two key light, and the camera in the middle — that’s it. From then on the challenge becomes getting your “talent” out of their shells (an open bar helps) and making sure you have some great props, including plenty of small objects (e.g. glitter and confetti) for throwing.

You can see the whole tutorial at the top, but the set up was pretty straight forward. As far as what they would do differently next time, they suggest putting down a tarp to catch all of that small, throwable stuff, and having a big monitor off-site for playback, so you can keep people away from the extremely expensive camera.

You can find the final video in our previous coverage here. If you haven’t seen it it’s definitely worth a gander. And if you really like this idea but can’t see yourself investing in a 40 thousand dollar camera, stay tuned because SFST has promised that a tutorial on setting up a money-saving version is coming soon.