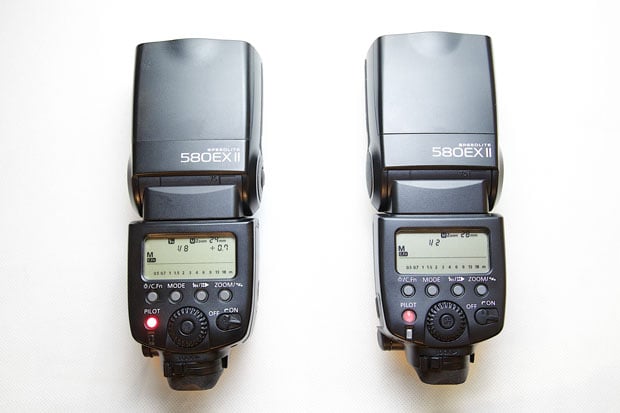 One of the two Canon Speedlite flashes above is fake. Can you tell which one?

About a month ago I walked into the Canon Quick Repair Centre in Shanghai. I had a minor problem with a Canon 580 EX II: the high-speed sync refused to work.

I had reasons not to be worried: the ﬂash was less than two months old, I had my warranty card and apart from having been ﬁred a few times the unit was as good as new. So when I walked up to the counter to explain my problem, the worst I could imagine happening was being told I wasn’t very smart followed by a brief demonstration. It wouldn’t be the first time when electronics are involved.

That didn’t happen. Instead, batteries were exchanged, coworkers called from lunch breaks and superiors consulted. Nobody could understand the strange behavior of my ﬂash until finally, an engineer spotted the issue: we were looking at a fake.

I had bought a counterfeit ﬂash.

But this wasn’t just any fake product. This one had fooled camera repair shops, professional photographers and Canon employees for way longer than we all probably would care to admit. (It had also fooled me for almost a month but I already told you I’m not very smart.)

You might think you could spot a Chinese knockoff product. We all have seen images of fake Louis Vuitton purses with crooked logos, or hilariously cheap-looking Apple product imitations. But you’d be wrong and it’s exactly this kind of thinking that got me in trouble.

I had purchased the ﬂash on the Chinese version of eBay — a site called Taobao. My local coworkers had told me how to shop there: go for a vendor with lots of positive feedback, avoid unrealistically low prices, chat with the store owner to confirm the products are legit and always use the cash on delivery method Chinese companies always offer because many local customers don’t have credit cards.

Taobao has a reputation for having bad sellers just like eBay, but so far I had been lucky: a brand new Manfrotto tripod ran me half of what I would have paid in the US and I had done similarly well purchasing a fantastic LED ﬂashlight.

I wasn’t overly concerned when I saw my Canon 580 EX II listed for about ¥2,280 (~$373) even though I had paid almost $130 more at a US-based camera shop just two years earlier. This was China, the country where everything was cheap!

I used the automatic translation feature in Google Chrome to chat with the vendor and quickly agreed to purchase the item. Just a day later, a delivery driver showed up. I noticed the ubiquitous red and white Canon tape, read the copy on the packaging and even opened it to fire a test shot before I paid the driver. I couldn’t find any faults, so I paid for it.

And now here I was, surrounded by friendly-to-a-fault Canon employees, who methodically removed any hope that the ﬂash might not be a knockoff after all.

“It was still a good ﬂash”, I thought as they took photos, but the truth still stung. If only I had known what to look for, I thought. Someone should write a guide, I thought.

So here is how you can figure out if your ﬂash is real or fake:

Pay attention to the serial numbers. Canon ﬂashes do not have serial numbers that start with letters [Update: The technician who told me this may have been mistaken. See below]. Supposedly the Canon logo on the fake ﬂash is slightly less refined than the real equivalent but I just can’t see the difference. Once they had seen the odd serial number, the Canon employees began their closer inspection.

The color of the glass screen at the top end of the ﬂash is slightly different. The fake ﬂash has a slightly more blue looking glass than the real one. I thought this was just because my real Canon 580 EX II ﬂash was a few years old and Canon might have produced updates in the meantime but this inconsistency should have been another hint that my new ﬂash was a fake. (The ﬂash bulbs seem to also have a different shape but I consider that too difﬁcult to spot to make it a separate point.)

Using a knife or scissors, peel back the rubber on the side of the ﬂash head. You will see a white adhesive. Canon applies a set of very thin intersecting lines of adhesive here, creating a fine mesh that still looks fairly dark. My fake ﬂash just has one solid slab of white glue. When the engineer saw this, he was absolutely sure this ﬂash was a fake.

Finally, if you have a camera with ﬂash control menus, connect the ﬂash to the hotshoe and see if you can change its settings in camera. This part works unreliably on my fake ﬂash but it’s rock solid on my real Canon EX 580 II. If you have a ﬂash that cannot be conﬁgured from a camera menu, be suspicious. So where does this leave me?

I have a fake ﬂash that seems to put out the same amount of light as my real 580EX II. That’s the crucial part — if it were performing significantly differently than my other ﬂash,
I’d be far more disappointed.

I fully expect the fake to break sooner rather than later, and it certainly wasn’t what I was hoping for, but until it does, it’s the ﬂash I’ll take with me when I go into dusty, wet and
generally camera-hostile environments. Once it goes to ﬂash-heaven, I’ll hopefully have lots of interesting pictures I was able to take with it. And at least to me, that’s alright.

Update: Various commenters have stated they have flashes with serial numbers that begin with letters and Canon CPS has since stated the “serial number is not a determining factor.” I regret this error. Supposedly the Canon logo on the fake ﬂash is slightly less refined than the real equivalent but I just can’t see the difference.

About the author: Chris Petersen-Clausen is an Art Director who currently lives in Shanghai, China.

Peer Into Early Astronaut Spacesuits With These X-Ray Photographs