When technology and marketing director Michael Kammes got married to the love of his life earlier this year, he wanted to capture some footage from a unique perspective that most people don’t get to see: the groom’s. Using a 1080p keychain camera, he created what may be the first ever pair of groom point-of-view hidden camera glasses.

The video above are the highlights of the footage, captured throughout the ceremony and reception. 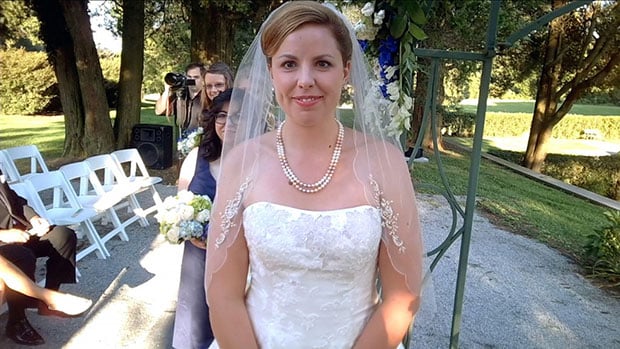 The 808 #26 keychain camera Kammes used has been popular for a number of years among RC airplane enthusiasts. To attach it to his glasses, Kammes connected a 15-inch lens extension cable that allowed the body of the camera to be hidden away from the glasses themselves. The smaller lens portion was attached to the glasses near Kammes’ right temple. In the end, Kammes says he was “very pleased with the results.” There were some things that could be improved (e.g. color reproduction, light leaking, the fact that glasses don’t always look in the direction of the wearer’s eyes), but the camera glasses successfully captured the most important moments of the wedding from the groom’s point of view.

You can read a more detailed account of how the camera glasses were conceived and assembled over on Kammes’ website.

P.S. Similar projects have been done in the past using cameras hidden in bride bouquets (another one here).