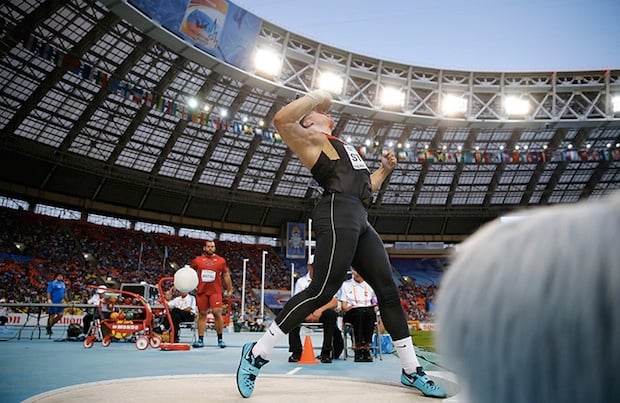 Sports games and medals are often won and lost at the hands of the referees. Be it an offside call that might have turned into a goal or the line judge that just doesn’t want to give those last 6-inches your team needs for the first down, there’s good reason cameras are becoming standard backup for refs who might have missed something.

German shot putter David Storl has a particularly good reason to be thankful for cameras these days, since a photo that was almost deleted managed to overturn an erroneous foul call and win him the gold in the IAAF World Championship Men’s Shot Put Finals last week.

The photo was taken by Reuters photographer Kai Pfaffenbach, who had set up one of his remote cameras on the ground next to the shot put ring to get a more unique view of the action. Little did he know that one of his photos would change the course of the competition.

When Storl’s final attempt (a season’s best) was ruled a foul, a lengthy discussion with the judges ensued. It was at this point that Storl ran over to Pfaffenbach — who was on the verge of deleting the fateful photo because of poor composition — shouting/asking in German if he had photos. He did, and the six frames he captured of Storl proved without a doubt that the attempt was fair.

Once the judges saw the photos, the call was overruled, a measurement taken, and Storl eventually earned the gold as nobody managed to best the attempt.

The fallout for Pfaffenbach has been a whirlwind of gratitude and viral Internet fame, as newspapers the world over run stories with titles such as ‘Reuters Photographer Saves Gold for Germany.’ “It was then that I really realised how grateful [I was]” the photographer told Canon Professional Network. “I did something special while I only tried to do my job as professionally as ever.”