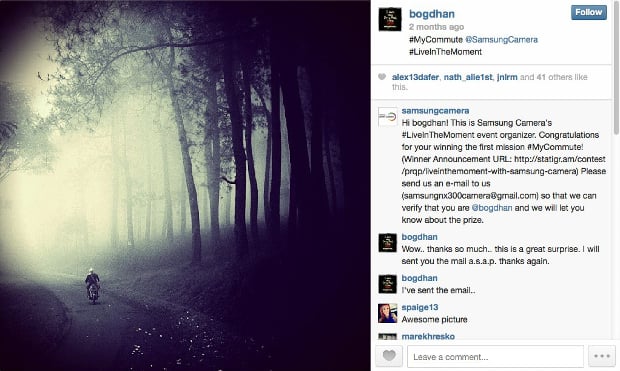 One of the downsides to living in an uber-connected digital world is the ease with which intellectual property can be stolen. Whichever bogus excuse they choose to use, many people seem less than concerned when it comes to stealing someone’s photography and claiming it as their own these days.

One such person is Instagram user @bogdhan, who recently won Samsung’s ‘Live in the Moment’ Instagram contest (and an NX300) using a photo that he never actually took.

The photo he used, which won the #mycommute category, was a slightly altered version of this one by famed photographer Hengki Koentjoro‘s shots:

Koentjoro didn’t find out about the infringement until a friend tipped him off almost a month after Bogdan won the contest. Samsung had posted the winning photo alongside congratulations on its social networks, and so naturally, Koentjoro immediately took to the company’s Facebook and Instagram to comment and set the record straight.

Once he did the support was overwhelming, with many denouncing not only the photo thief, but Samsung itself for not doing what many believe was its due diligence in checking the photo’s validity. Interestingly, the thief himself seemed unperturbed, or even annoyed, at the development: 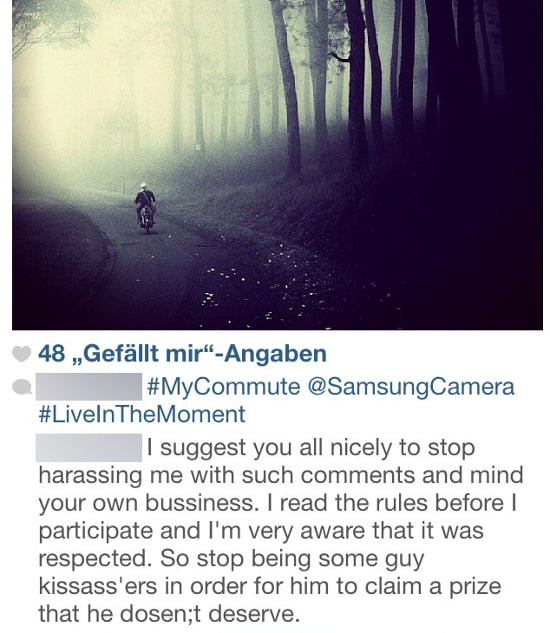 Samsung, on the other hand, was a bit more apologetic. The company immediately took down the photo from its social networks and disqualified Bogdan for copyright infringement. Additionally, the company also sent Koentjoro a personal message apologizing for the mistake and assuring the photographer that the “winner” would not be receiving his prize.

According to Image and View, Mr. Koentjoro’s representatives, Dr. Robert Tobin and Hitoshi Ohashi of the TobinOhashi Gallery in Tokyo, believe that Samsung should do more. “Just deleting the picture, sending a kind mail to the original photographer and hoping that ‘everything is alright now’ is far not enough,” said Tobin.

He would like Samsung to make a public announcement complete with a clear explanation of what happened, answers to “numerous questions” by Koentjoro’s fans, and a “serious apology” to the artist himself.

(via Image and View)

The Forest Photography of Jürgen Heckel