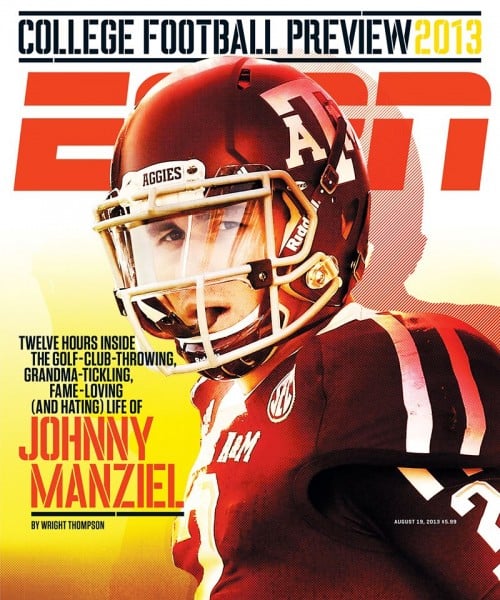 With the college football season winding down, I had the assignment of covering the last Texas A&M home game. The last game I was available to shoot was the second to last home game against Sam Houston State University. This game was just a week after A&M upset the Alabama Roll Tide in Alabama, and Johnny Manziel was instantly catapulted into the rare position of becoming a freshman Heisman finalist.

When covering a game, you have to focus on two main things, action and stock. Action coverage is shooting the plays to tell the story of the game. This includes getting the action shots of the players throwing, catching, running, tackling as well as celebrating big plays or looking dejected after giving up a big play. Everything that tells the story of the day.

The stock coverage is where you focus on getting clean shots of important players. Paying attention to the story lines of the season is absolutely imperative. When shooting the last college game of the season (at least that I was covering) I am focusing on stock of

The cover shot that eventually ran on the cover of ESPN the Magazine was a shot that was a stock shot:

The elements of a good stock image are:

You ideally want a picture that could come from any game. While players, especially in the NBA, love the alternative jerseys, they are worn so little, they are often disliked by sports shooters for stock because people know them from their main jerseys.

Think of Michael Jordan. I always picture him in a red or white #23 jersey, not the black alternate Bulls jersey or the #45 jersey. So most of the time when you see a picture of Michael Jordan playing, he will be wearing the white or red #23 jersey. Likewise, the maroon helmet and maroon jersey is often what people associate Texas A&M with and since A&M was wearing both in this game, it would be a good time to shoot stock. 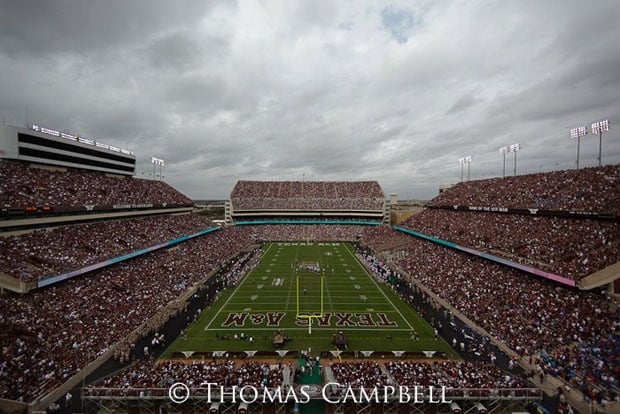 Good light is somewhat subjective and often up to the photographer. I personally really love when a scene is backlit. I want the player between me and the sun. This can cause some problems shooting if the sun is so low that you get some solar flare or get the player washed out. You can see a little of this in my shot of Manziel before ESPN cropped it.

When backlit, the sun creates a rim light similar to what you would use in a studio and the rim will help separate the subject from the background. I have had other photographers tell me that they would not have been where I was on the field because they felt the light was too harsh. And the truth is that I wasn’t surrounded by many photographers.

It was definitely cooler on the other side of the stadium in the shade. But if there is back light to be had, you will find me shooting through it.

In this case, the back light put me on the wrong side of Manziel for the action. Manziel is a right handed quarterback, which means when he drops back to pass, his back will be to me. To shoot the action, I want to be on the opposite side of the field so that I can see him from the correct side when he throws. But my preferred light was on my side, so I chose the preferred light over the good action. Sometimes you get lucky and the action comes to you.

For the clean background, I want something fairly solid and something that the subject can stand out against. In this case, I got a solid background of fans, wearing the same color as Manziel. Shooting with a very shallow depth of field helps your subject stand out from his background. In this case, I am using a 400mm 2.8L IS lens on a full-frame 5D Mark III camera. Because Johnny is so much closer to me than he is to the fans, they are very blurred out and it makes for a very creamy maroon background. There are no physical structures to interrupt the soft bokeh, so I have a pretty perfect background.

Backgrounds are one of those things you don’t have a ton of control over, but you can move to change it. I tend to get as low to the turf as possible to shoot up. Between Johnny and the fans are the coaches, players and bench area, but because I got so low to the ground you can’t see them and it looks like Manziel is towering over me a little. The rim light from the sun helps separate Manziel from the background, especially because he is wearing the same color as most of the background.

In my image, Johnny is completely isolated. There are no other people identifiable in the image. This is often hard to do on a field where you have 22 players and seven referees. Having him isolated with good light and a nice background makes the subject instantly identifiable. I tend to prefer to shoot horizontally for several reasons. With a 5D Mark III file, you can crop a ridiculous amount and still have a very good file. In this case, ESPN took a 3/4 horizontal shot and cropped it to just a head shot and still had a good enough file for a large cover. 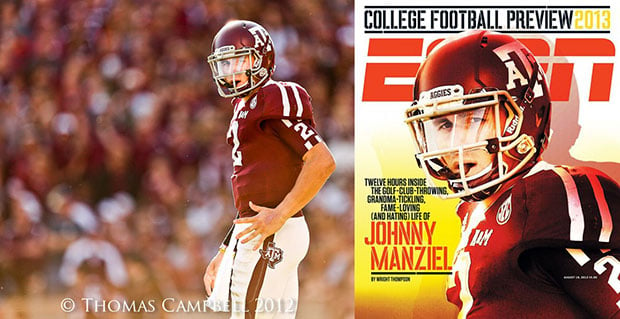 You can almost always make a vertical shot out of a horizontal, but you can’t always make a horizontal shot out of a vertical. Because there are no other identifiable subjects, I have in one file something that could run horizontally across two pages, vertically on one page or anything in between. I find the horizontal composition gives the greatest flexibility. Also, with all the negative space to Manziel’s left, you could drop in text to lead off an article.

In football more than any other sport, a clean look at a player’s face is very difficult. When players wear a visor, it makes it even more difficult because you often have glare on the visor or, in the case of Ryan Mathews, a tinted visor with zero visibility.

When I shot this image, Manziel had just called a play and was looking at the cornerbacks lining up on his receivers to check his coverage. So it looks like Manziel is staring intently at me, but he is just reading the defense. The best way to get a shot of the eyes in football is to get as low as possible. Sit down, squat, kneel or even law down. If you are standing, it is likely that the top of the facemask will be covering your view, but when you get low like I always do, you can get under the facemask. 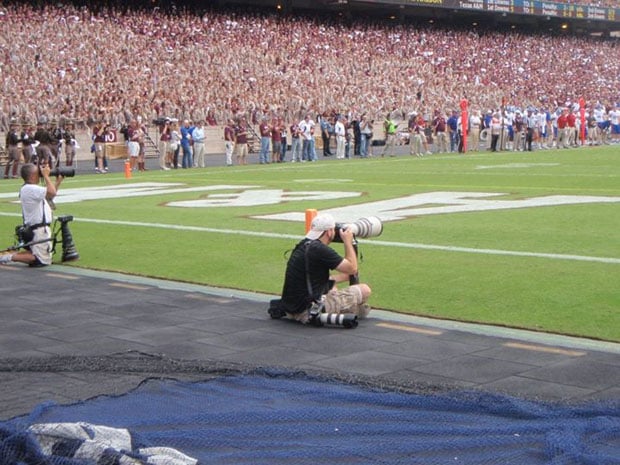 Capturing a good expression is a little patience and a lot of luck. Another case of knowing your sport and what is going to happen is very important. Manziel looks like he is staring me down, when he is really just reading his coverage. But if you know that he is going to call the play, look at his receivers, look for the coverage and maybe call a hot route, you will know where to set up for a play so that it looks like he is looking at you and it looks like he is staring at you or yelling at you when he is really staring or yelling an audible at his receiver. 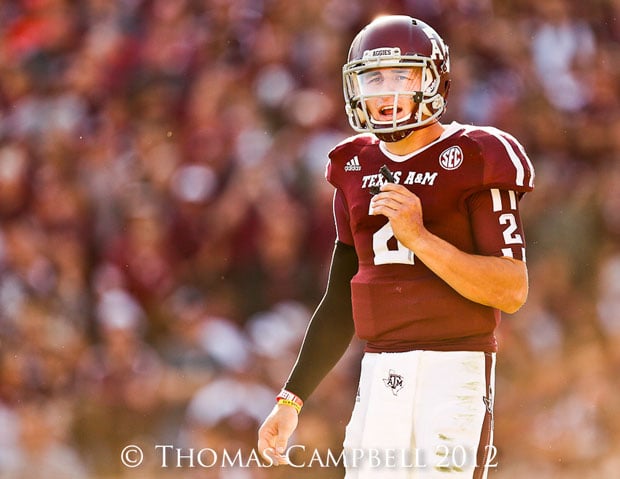 So to get the shot I did, I evaluated the light, positioned myself low so that I could get a clean background, positioned myself so that I could get a clean shot of Manziel without other players and that he would look in my general direction. Shooting sports for action and stock is all about proper planning and executing. Knowing the sport, the players, player tendencies and the story lines is equally as important as knowing how to focus, compose, and shoot. 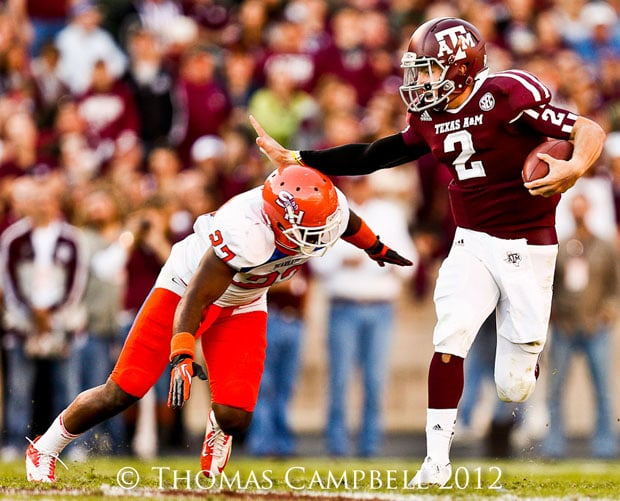 I shot just three of Johnny Manziel’s thirteen games, but I went into all three with a plan of how to shoot the action and how to shoot the stock. When I shot his second game of the season at SMU, we didn’t really know how special Manziel’s season would be. By the time I shot the Sam Houston State game, we had a pretty good idea.

About the author: Thomas Campbell is an award-winning photojournalist and sports photographer whose work has been featured in newspapers and magazines across the country. Campbell graduated from Texas A&M with a degree in Communications and Journalism. Visit his website here.

Hyetis Crossbow: A New Smartwatch that Packs a 41MP Camera