It’s the weekend, which means we get to share something silly with you to help you either forget about last week, put off thinking about next week, or both.

Last week, we shared a humorous video in which pranksters used a squirt gun camera to covertly spray unwitting tourists in London. In this week’s video, twins Jack and Finn of JacksGap pretend to “teleport” mid picture to the astonishment of the stranger they roped into taking their photo.

The prank is actually a collaboration between YouTube’s PrankvsPrank and the twins. Jack would ask a stranger to take his photo next to a sign, and while the person was lining up the shot, PrankvsPrank’s Jennifer Smith would interrupt just long enough for Jack to duck out of view. 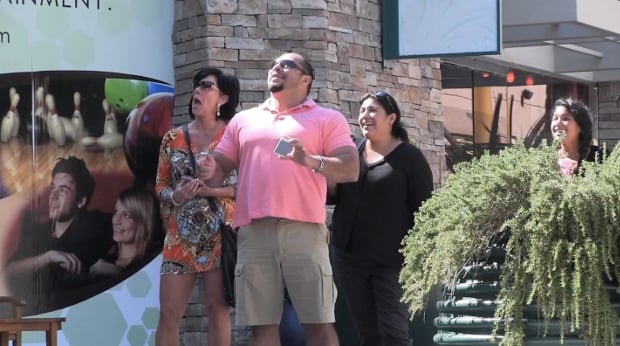 By the time Smith is done with the stranger, Jack is gone and his identical twin Finn is waving from the landing above. To complete the prank, Finn would then duck back down at the exact moment Jack popped out from behind the sign to get his phone back. Reactions ranged from stunned disbelief, to curiosity, to laughter.

Unfortunately, this isn’t one you can try at home unless you’re one of the 0.3% of people who actually have an identical twin. But even if you can’t try it, it’s still fun to watch the looks on people’s faces when the person they were photographing has all of a sudden “teleported” to the walkway above them.

Check out the video at the top to see for yourself, and if you want to see more photo pranks, click here to browse through some of the ones we’ve covered in the past.