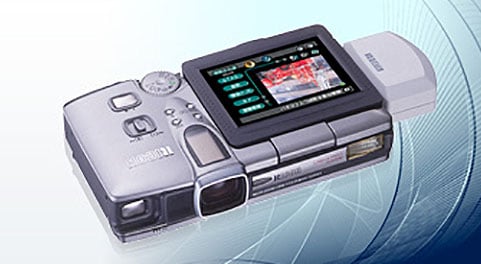 Camera makers narrowed the point-and-shoot market down to a couple of basic designs some years ago, and ever since it’s been one variation after another on slim-and-silver or megazoom brawn. But oh, back in the day…

There was room for experimentation, as shown by these inventive camera designs that turned heads at the time but never quite became industry reference points.


(Current price is the best deal for a working model on eBay or Amazon Marketplace). 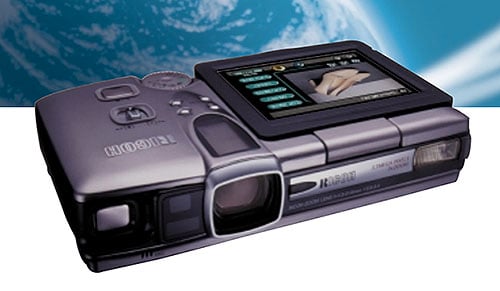 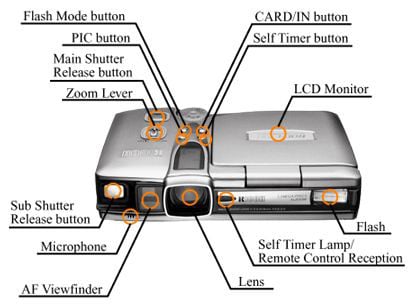 “When in doubt, multitask” is a long-running strategy in the electronics business, and few camera makers have been more ambitious in that regard than Ricoh. The RDC-i700 combined a then-state-of-the-art 3.4-megapixel camera with all the mobile computing power of an Apple Newton. Just plug in a modem or LAN card, and you could send e-mails (composed via handwriting recognition) or faxes, surf the Web and create presentations. Oh yeah — it took pictures, too. 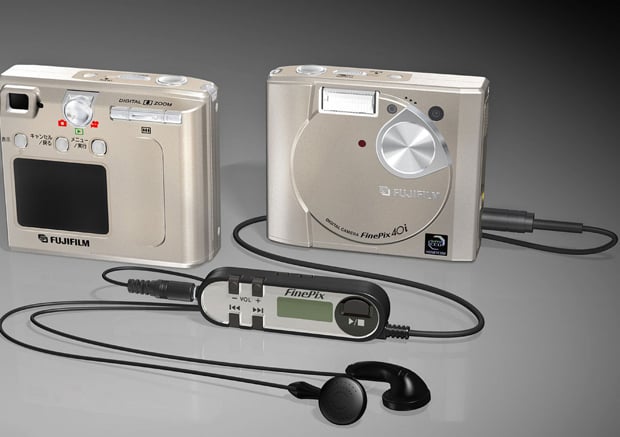 Or maybe you’d rather have an entertainment center mashed into your camera? Several camera manufacturers tried to cash in on the MP3 boom during the early years of the iPod era, but nobody pushed it as much as Fujifilm’s “i” series, with its fancy inline remote/headphone jack, whopping 64MB capacity and close to three hours of battery life.

Getting music onto the device in the required .SQV format was complicated, however, and few people saw the advantage, especially at the steep price. “Listen to music on the same thing I use to take pictures? Might as well cram a phone and a GameBoy in there while you’re at it.” Sony had a big early lead in digital cameras thanks in no small part to using ubiquitous 3.5″ floppy disks as the storage medium for its Mavica line. If you were going to take more than a couple of shots, however, you had to carry around an awful lot of the things, and improving image sensors meant the 1.44MB limit posed issues, too. Sony’s solution: Cram a CD burner into the camera.

The MVC-CD1000 used scaled-down 3.5″, 156MB discs and required a lot of patience. You had to “finalize” a disc to see images, meaning you couldn’t delete, rewrite or even view images on-camera. The capacity advantage was compelling however, and Sony kept the CD-R system going through three years and six product revs. 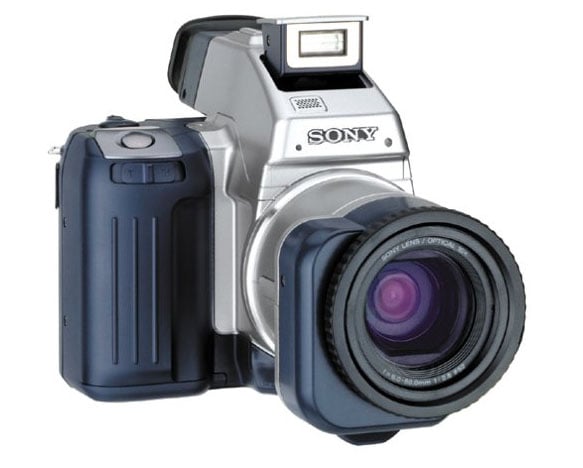 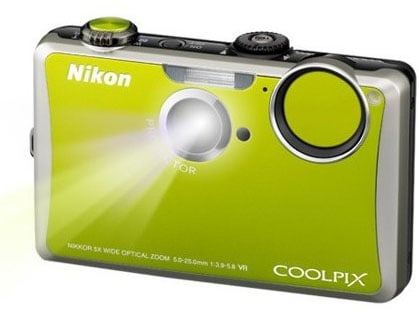 The “pj” in the name stands for “projector,” as in a low-power projector crammed into a standard 14-megapixel P&S. The projector was too underpowered to be of much practical use, and the intended market was never clear. Traveling sales reps who need to do impromptu presentations in bathrooms? Parents who don’t feel they’re adequately showing the wonderfulness of their offspring unless displayed lifesize? Sales went accordingly. 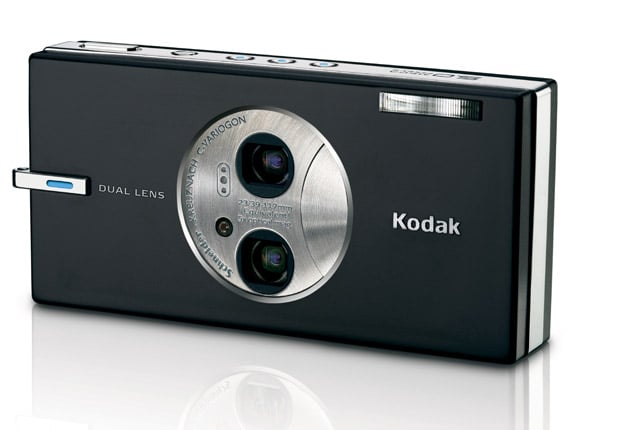 Fitting a lot of focal range into a compact camera was still a fair challenge in 2006, so Kodak came up with a novel solution: Two lenses. The V570 had two lens and image sensor assemblies — a wide-angle 23mm equivalent and a 37-117mm zoom — mounted one on top of the other. You switched between one or the other electronically.  Unfortunately for Kodak, advances in lens origami soon rendered such tricks unnecessary. Kodak repeated the design in a few more V-series models before moving on. Talk about ahead of your time. Years before Nikon got swivel-crazy with its Coolpix bodies and at least a generation before selfies became a meme, Casio designed the QV series with  swiveling lens assembly aimed squarely at making self-portraits easier. That wasn’t enough to overcome middling image quality and voracious battery life, however, and Casio dropped the design after two product revs. Too bad — if they’d stuck with it, this could have become Geraldo Rivera‘s favorite bathroom companion. 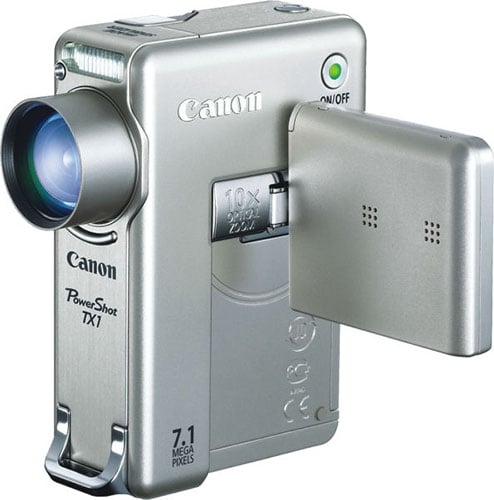 Still cameras were already getting pretty capable with video by 2007, but that didn’t stop Canon from trying to make a big deal of combining the two functions in the TX1, whose body had to be held in a vertical camcorder position whether you were shooting video or still photos. Specs and performance were actually pretty good, but few could get past the awkward ergonomics when used as a still camera or the need to use the space-hogging Motion JPEG format for video. 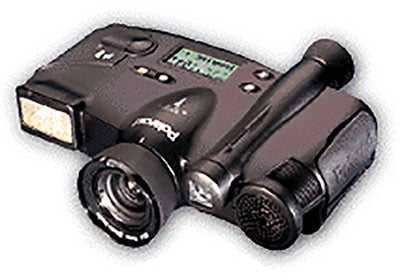 Ah, Polaroid — so much more than a fantasyland of discarded film stocks. The instant-photo pioneer was also an early player in the digital camera world, introducing a number of innovations. No camera seemed more forward-looking than the PDC-3000. It’s tempting to focus on the camera’s design — it looks more like a navigational aid from “Battlestar Galactica” than a photographic tool — and leave it there. But much of the innovation was on the software end. Not satisfied with the state of JPEG or RAW at the time, the company came up with its own PDN (Polaroid Digital Negative) format and Image Quality Architecture management software to ensure archival and image-quality goals that would later become a standard part of imaging workflow. Just not in the PDN format. 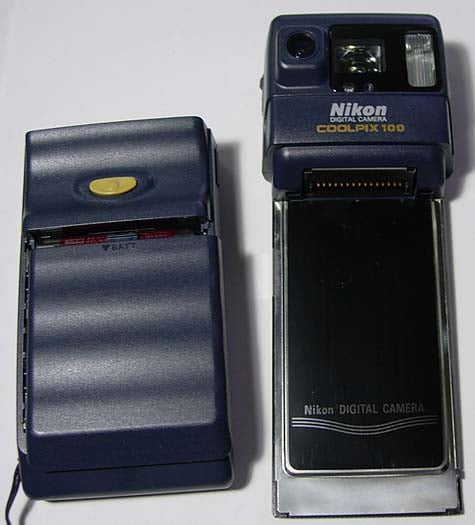 Return with us to the heady days of the late 1990s. Bill Clinton was still in the White House, Katrina & the Waves were huge, and camera makers still hadn’t decided what form factor would appeal to this wacky new digital segment. Nikon’s brave stab into the unknown was the resolutely vertical design for the Coolpix 100, which made it look rather like a fancy flashlight but worked quite well in accommodating the PC-card interface that was the main option for getting photos off the camera. Slip the camera/card assembly off the battery pack, plug it into a space PCMCIA slot on your laptop, and you were ready to explore the infinite possibilities of .33 megapixels. 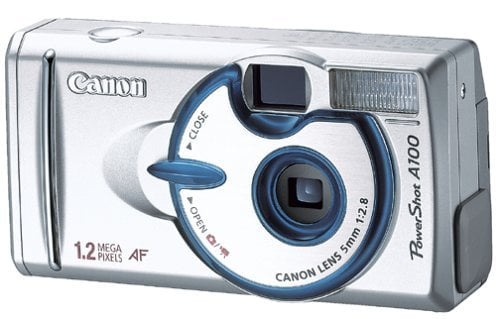 Which companies would lead the digital camera market was still an open question in the early aughts, but one thing was certain — nobody rocked a lens cap like Canon. The rotating circle of protective plastic that dominated the look of the Powershot A100 protected the lens and viewfinder, turned the camera on and off, switched it from still mode to video and never got lost or disabled the camera with a broken or blocked spring.

Image credits: All images courtesy of respective camera manufacturer, except Coolpix 100, by Plbcr