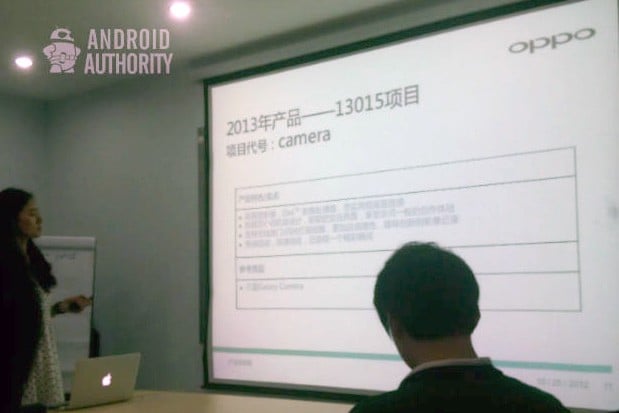 While smartphones have, especially of late, taken to blurring the lines between camera and phone, “smartcameras” like Samsung’s Galaxy Camera flipped the idea on its head by putting a phone’s operating system on a camera rather than the other way around.

Since then, Samsung has announced a few other options in the same milieu, (e.g. the Galaxy NX interchangeable lens camera and the 10x optical zoom Galaxy S4 Zoom) with fairly little in way of competition on that front. But Chinese electronics manufacturer OPPO is looking to move in on Samsung’s territory.

Originally just a rumor reported by Android Authority, OPPO has now confined that the company is indeed working on a line of camera-centric devices to rival the Galaxy Cam and its ilk.

Details are still sparse, but it looks like the devices will be part of a new “N-Lens” line that will focus on high-resolution sensors and impressive low-light performance. Far from a side project, though, the company told Engadget that the N-Lens line will be the “most important flagship series for OPPO going forward.”

It’s uncertain whether or not Android will be the operating system at play here, although it certainly seems likely that this will be the case. And even though OPPO has confirmed to Engadget that the camera will have cellular capabilities, they chose not to specify whether or not it will be able to make calls ala Samsung’s Galaxy S4 Zoom.

Still, it looks like we have another “smartcamera” in the pipeline, set to challenge the point-and-shoot and camera phone worlds alike. No word yet on any release date or pricing, but Android Authority believes the N-Lens line might make its first appearance at IFA 2013 in Berlin.

Portraits of Complete Strangers Touching Each Other