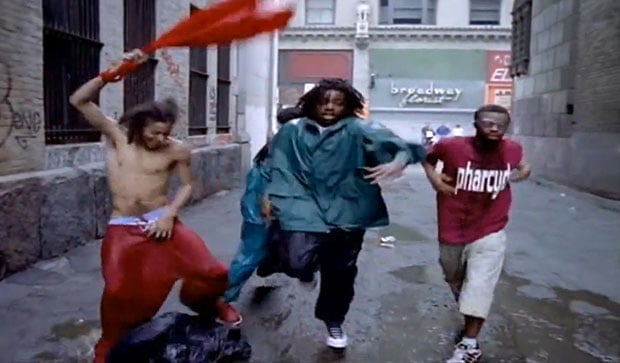 Yesterday we shared an amazing time-lapse music video spanning 24-hours on a Parisian rooftop.  While the video did, in fact, make my jaw “drop” (there’s a pun coming), it got me thinking about one of the most amazing music videos I’ve ever seen: “Drop” by The Pharcyde.

Released in 1996, this video is an amazing feat pulled off by none other than director Spike Jonze (Being John Malkovich, Adaption, Where the Wild Things Are).  The video is incredible.  Take a moment and see what I mean:

What makes it even more fun is realizing that the band had to actually memorize their song phonetically backwards so it would sync up with the film when played forward.  They went so far as to hire a linguist specifically to help them formulate the phonetic sounds of the backwards rapping, and spent a week memorizing these reverse phonetic lyrics.

There’s a surreal quality when watching the video to realize that their actions are all recorded in reverse, and the effect is really sold when the lip syncing matches up well. Especially in the first 30 seconds, which seem pedestrian at first glance.

There’s a good “making of” video as well that speaks with the linguist and band, and shows the cue cards being used to help everyone remember their lines.