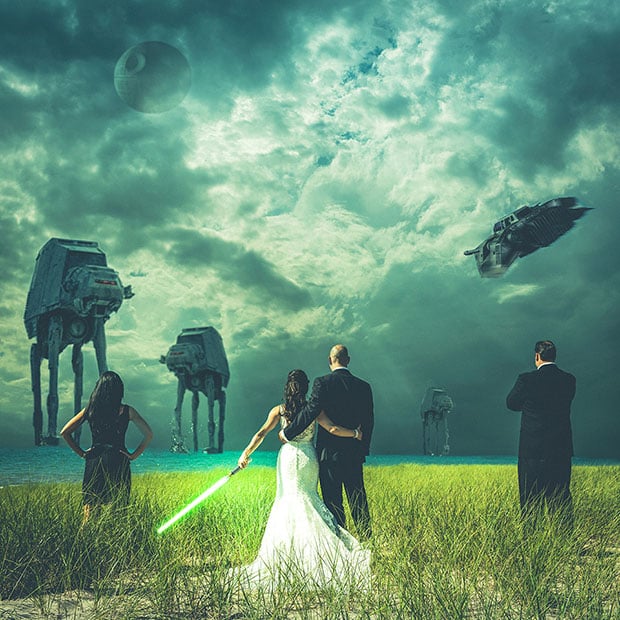 Creative, imagination-filled wedding photographs are starting to become quite trendy — at least online. Earlier this year, we shared viral photos of bridal parties running for their lives from a T-Rex and from Star Wars Imperial Walkers.

Chicago-based wedding photographer Steven Kowalski also joined in on the fun, creating the epic Star Wars-themed photograph above at a wedding earlier this month.

The couple, John and Mindy Doychich, were both huge Star Wars fans. While getting to know the couple, Kowalski discovered that they owned a replica of Luke Skywalker’s lightsaber, and the idea for a unique wedding photo was born.

Shooting the image was simple: Kowalski had the couple, their best man, and their maid of honor look out over Lake Michigan as if they were looking at things in the distance. This “took all of about 5 minutes,” Kowalski tells us. It was shot with a Canon 5D Mark II and 35mm lens at ISO 100, f/10, 1/200s. 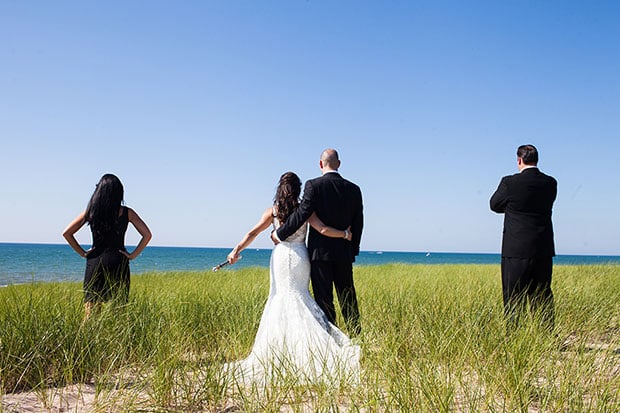 The real work came afterward. Kowalski says he spent somewhere around 6-8 hours on editing the photograph. “Not that it was particularly complex, but it took a while to find the color gradient I ended up using,” he writes to us.

After replacing the sky above with something more dramatic (and changing the aspect ratio to square), the photographer extracted various objects from Star Wars still frames (e.g. a Death Star, AT-AT walkers, starships) and inserted them into the photo.

“I know it may come across as the AT-AT’s walking on water, I just figured it’s a shallow body of water,” Kowalski says.

You can find a larger version of the resulting photograph over on the photographer’s Tumblr site.

(via HuffPo via Laughing Squid)

Image credits: Photographs by Steven Kowalski and used with permission