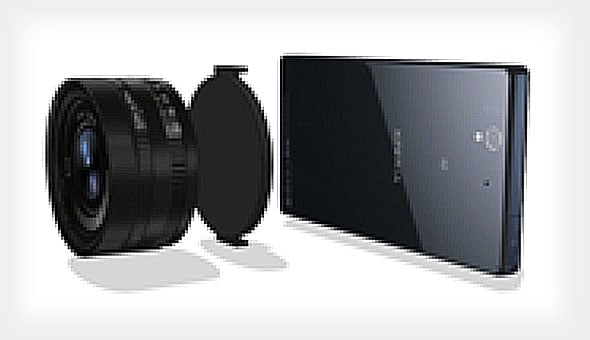 Crazy rumor brewing in the camera world today: Sony is reportedly building a camera lens with a built-in sensor — a lens that could be paired with a smartphone to create an interchangeable lens camera!

sonyalpharumors reports that two of its trusted sources have confirmed this new product, which contains not only an integrated camera sensor, but a battery and some memory as well.

The “lens camera” will connect wireless to a smartphone or tablet via NFC and Wi-Fi, allowing the mobile device to be used as the camera’s LCD screen and “body” while the lens snaps images and transfers them wirelessly.

In addition to being mounted to a smartphone as the lens — presumably with a special mount attachment (shown in the image above) — the lens will also have the ability to be used when unmounted.

Does that remind you of something? Yeup — it’s the same concept as the WVIL concept camera that caused quite a bit of excitement back in 2011. Here’s the “fake CES 2011 demo” video that captivated photographers’ imaginations:

And here’s a video introducing the concept camera:

If the rumored specs are true, this device is far from being a cheap gimmick: it will reportedly be comparable to the RX100 II compact camera, containing the same large-ish sensor and the same Zeiss glass. A followup model will reportedly contain a smaller sensor but a larger zoom.

SAR reports that this “lens camera” will almost certainly hit the market, as it was confirmed by the site’s top sources. Get ready for a world in which lenses don’t have to be mounted to cameras for photography to happen!

Thou Shalt Not Steal: There’s a Plagiarism Epidemic in the Photography Industry

Amazing Close-Up Photo of a Waterspout Rising Into the Clouds

‘F*ck You, Pay Me’ is a Glassdoor-Like Platform That Reveals Scummy Brands