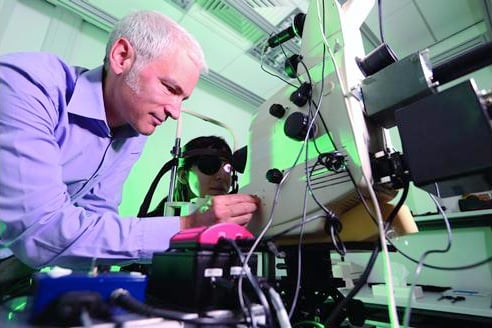 Here’s yet another example of how technology used in space can help us earthlings in other ways. A partnership between scientists at Cardiff University and the UK Astronomy Technology Center has yielded a prototype device that can help detect Age-Related Macular Degeneration (otherwise known as AMD) — a common form of sight loss — using camera technology designed originally for use on space telescopes.


The highly sensitive device, called a Retinal Densitometer, reacts to how an eye reacts following the exposure to a bright light source. Compared to detection methods in use today, the sensitivity of the camera used is key factor, allowing for the observation of different parts of the retina in response to light.

Using the Retinal Densitometer, which by the way is totally non-invasive, early diagnosis of AMD is possible. That could open doors for enhanced treatment options down the line.

“The benefits to patients are potentially huge, but the benefit is not just societal, it is also economic. We may be living longer but this in turn increases the pressure on healthcare services,” says research leader Dr. Tom Margrain of the School of Optometry and Vision Sciences.

As for the next steps for the Retinal Densitometer, Dr. Margrain says they’ll be bringing the device through official clinical testing, eventually through complete commercialization.

Just goes to show how useful cameras can be in all sorts of sciences!

(via Cardiff via The Engineer)