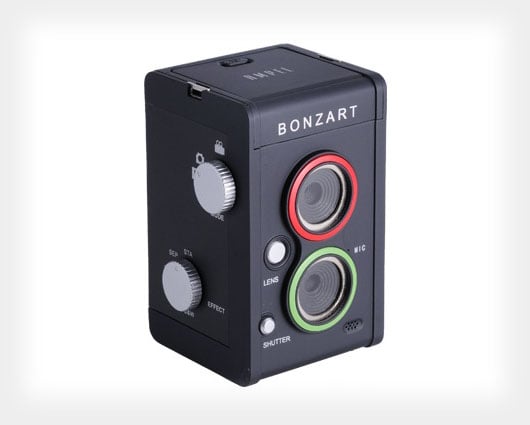 Getting your camera noticed if it’s not also a smartphone or a high-end shooter is getting harder by the day. And phones such as the newly announced Galaxy S4 Zoom are quickly shrinking the quality gap between the camera phone and the regular old camera.

So, in order to stand out, Bonzart decided to create something completely different. Their Ampel camera is an affordable, not-quite-toy, retro-styled, twin lens camera with the ability to shoot real tilt-shift photos and videos built right in.

We say not-quite-toy because, at first glance, it looks a bit like a toy camera. Named after German traffic signals, it looks like a twin lens camera crossed with a stop light, but the Ampel is a little more advanced than your typical toy.

SlashGear got a quick look at the Ampel earlier this year at CP+ in Japan:

Flipping up the top reveals your LCD, and controlling the two lenses is as easy as switching the mode dials located on the side of the camera. One of the lenses shoots standard images at either 4:3 or square crop ratios, and the other is, as we mentioned before, a tilt-shift lens.

You can also attach a magnetic wide angle lens to either of the two for a different look. And if you’re into applying filters to your images, the Ampel offers you a choice between standard, vivid, black-and-white, sepia, and “refreshing.”

Here are a few sample images taken with the Ampel: Already sporting native tilt-shift capability and priced at only $180, you wouldn’t expect the internals to be much to write home about, and they’re not. The camera is built around a 5-megapixel 1/3.2-inch CMOS sensor, and can only shoot video at a max of 720p.

But it might be a fun camera to have around, and a cheap way to dabble in tilt-shift photography since a tilt-shift lens of your own will likely run you somewhere around $300 on the low-end.

The camera is now on sale in the US, UK and Japan. To learn more about the features and/or purchase one of your own, head over to the AC Gears online store here.

The Best Photo I Didn’t Take: Snapping a Photo with the Camera Between My Ears