During the 2013 Moore tornado last week, a young man named Charles Gafford III stuck his cell phone through a hole in his storm shelter and captured close-up footage of the EF5 tornado as it passed by. If you thought that video was crazy, check out the footage above — it shows what it’s like to get hit directly by a massive EF4 tornado!


The footage was captured by veteran storm chasers Brandon Ivey and Sean Casey, who hunted down the tornado when it touched down in Smith County, Kansas yesterday afternoon.

Despite what you might think, the duo wasn’t trapped in the tornado by accident — they intentionally rode through the storm while sitting in a custom made tank-like Tornado Intercept Vehicle (TIV) designed by Casey: 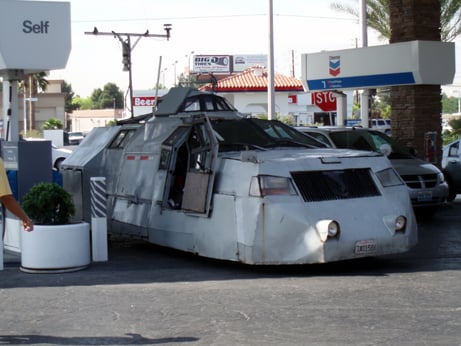 The TIV is like an ugly version of the new Batman Tumbler. It’s based on a Dodge Ram 3500, weighs 14,300 pounds, has 625 horsepower, can travel over 100MPH, has a range of 750 miles, is protected by a 1/8-inch steel skin covering a 2-inch steel frame, and is covered by a bullet-resistant 1.63-inches of polycarbonate sheets and glass.

Here’s a video in which Casey introduces the TIV:

Casey is an IMAX filmmaker who appears in the Discovery Channel series “Storm Chasers.” The vehicle he design is built to withstand EF-5 tornadoes with winds of over 200 miles per hour. The tornado captured in the video above was measured at half-a-mile wide and with winds of 150-175MPH, classifying it as an EF3/EF4 tornado.

The force of the wind was so powerful that a hatch and door on the vehicle both blew open, instruments were ripped off the exterior, and a piece of wood flew inside. Luckily for the two cameramen, the TIV did stay on the ground. Luckily for us, they kept their cameras rolling.