Tornadoes can be simultaneously awe-inspiring and terrifying (as an Alabama resident for the past 6 years, I can attest to that), and this time-lapse captures ten of them in action, including a mile-wide EF4. Fortunately, the majority of the tornadoes caught on camera during this chase missed (sometimes barely) major towns and cities. If you wanna get right into the action, the good stuff starts around 3:45. 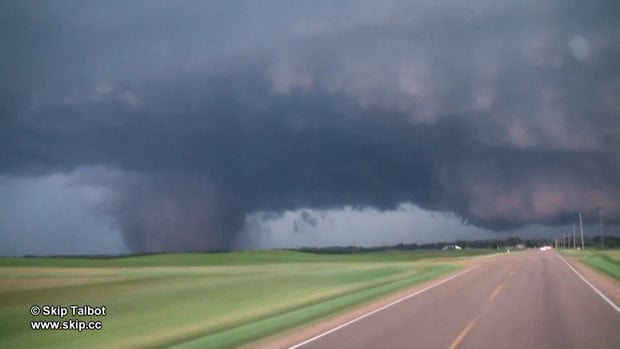 Not a traditional stills time-lapse, this footage was actually shot at 30fps with a camcorder and then sped up to get an extremely smooth effect. Amateur storm chaser and videographer Skip Talbot explains why:

The video was shot at 30 fps, and then sped up four times. When it’s sped up, four frames are blended into one. This 4x video was sped up another four times, the frames blended again. The result is very smooth. The trick is starting with video that’s been shot with exposure times close to the length of time between frames. I get this automatically using a camcorder. A still time-lapse with large time﻿ gaps between frames would require filters to extend exposure time and eliminate stutter

While this is by far the most exciting of Talbot’s chases, it’s only one of a 22 chapter video, which you can view in its entirety at this playlist.