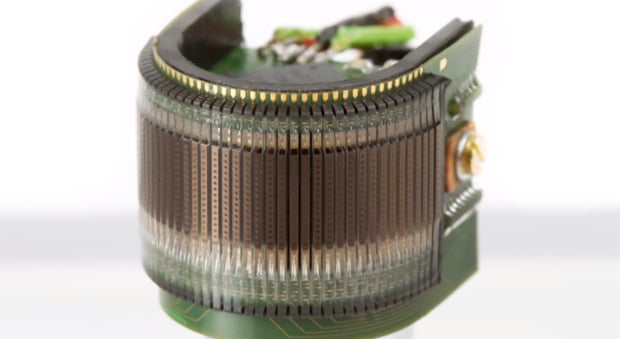 A few weeks ago, a team of researchers from all over the world boasted that they had created the world’s first working compound eye cam at the University of Illinois. Sort of like a balloon with 180 node-like “ommatidia” on it, the camera was quite an achievement.

It didn’t take long, however, for another team of researchers to break into the same market and offer the Illinois camera some bug-eyed competition. The Swiss research group Curvace has created a 180-degree field of view camera that looks a little like something Star Trek’s Geordi La Forge would wear.

Here’s a short intro from Curvace:

The prototype camera is called the Curved Artificial Compound Eye, or CASE. It lines up tiny sensors in lines parallel to each other on a flattened strip, and then bends the strip into a 180-degree semi-circle. Two of these back-to-back could even create a 360-degree field of view.

Like the Illinois camera, it comes with both the advantages and disadvantages of a compound eye cam. By arranging sensors the way they did, they get a 180-degree field of view with nearly infinite depth of field and negligible distortion; the trade-off is limited resolution. 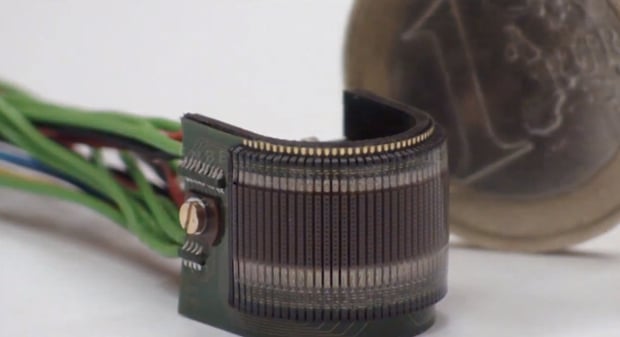 Compound eye cameras such as these will likely make their way into both the civilian and military fields soon, with applications ranging from endoscopes to micro drones to research on insect vision.

For now, both cameras are in the beginning phases with plenty of room left for significant improvement, but the hope is that as resolution improves, we’ll end up with a best-of-all-worlds camera that can see a clear picture of everything, all at once, with unlimited depth of field to boot.

To find out more, head over to Curvace’s website or check out the video above.

The Kobayashi Maru of Photography