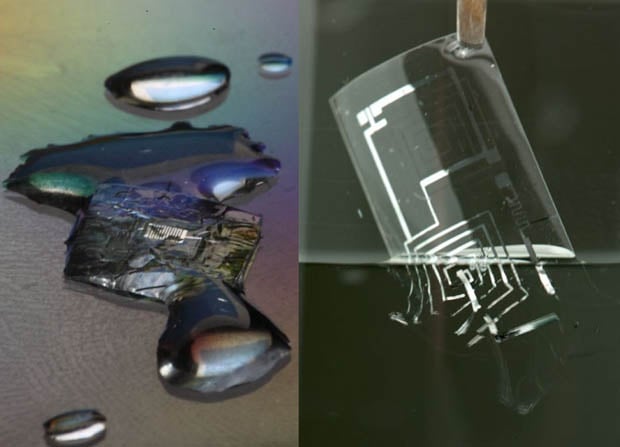 What if there were a disposable digital camera that you could eat after using? Sounds bizarre, but it already exists. Scientists in the US are working on uber-thin electronics that can be dissolved inside the human body once their job is done. Among the many possible uses being explored is photography.

The technology, created by researchers at the Beckman Institute, is called “transient electronics” and relies on the fact that silicon dissolves in water. Ordinary silicon chips would take forever to dissolve if immersed in water, but the scientists were able to speed up the process by using extremely thin sheets of silicon called nanomembranes — sheets that can dissolve in just days.

Among the transient devices tested so far was a digital camera, which allows doctors to photograph and monitor the insides of a patient without having to retrieve the camera afterward. The University of Illinois writes,

[…] the researchers have already demonstrated several system-level devices, including a fully transient 64-pixel digital camera and an implantable applique designed to monitor and prevent bacterial infection at surgical incisions, successfully demonstrated in rats.

The technology could also make ordinary consumer electronics more “green” — imagine if devices could just melt away once they’re tossed into a landfill! Pretty exciting stuff.

(via University of Illinois via BBC via TogTech)

SpinLight 360: The Jack of All Trades of Flash Modifiers