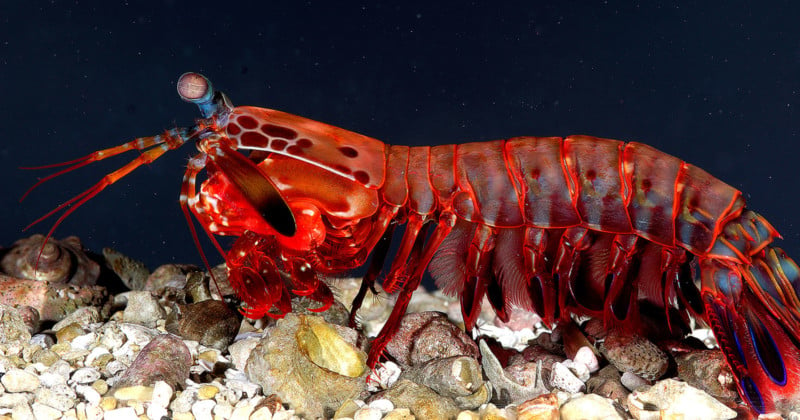 Researchers from the University of Illinois have managed to create a new camera called the Mantis Cam that can see polarized light. This technology provides possible solutions for everything from unlocking the mysteries of the underwater world to early cancer detection.

The research was published in the journal Optica and takes its inspiration from the mantis shrimp, a crustacean with an incredible visual system. Humans have 3 different types of color receptors, but the mantis shrimp has 16 different receptors alongside another 6 polarization channels.

Animals in the underwater world use polarized light for “covert communication channels” as well as hunting and navigation.

“The animal kingdom is full of creatures with much more sensitive and sophisticated eyes than our own,” says Viktor Gruev, co-author of the study. “These animals perceive natural phenomena that are invisible to humans.”

The technology works by stacking photodiodes on top of each other in silicon within the camera. It allows color to be seen without using special filters. In the mantis shrimp’s eye, photosensitive elements are stacked vertically on top of each other in the same fashion. This allow for shorter wavelengths of light to be absorbed.

“By combining this technology with metallic nanowires, we effectively have replicated the portion of the mantis shrimp visual system that allows it to sense both colour and polarization,” said researcher Missael Garcia.

While offering opportunities in healthcare such as early cancer detection, the technology can also be used to decode the sensory and communication systems of animals underwater.

This video shows examples of the technology in action:

“By mimicking the mantis shrimp visual system, we have created a unique camera that can be used to improve the quality of our lives,” says Gruev. “The notion that we can detect early formation of cancer is what is driving this research forward. The cost of this technology is less than $100, which will enable quality health care in resource-limited places around the world.”

(via University of Illinois via The Engineer)