According to the Encyclopedia of World Climatology, lightning happens about 40–50 times per second worldwide; that translates into almost 1.4 billion flashes per year. But of the 1.4 billion that happen in 2011, we’re pretty sure this was the only one captured at 11,000 frames per second, turning a one second lightning flash into an incredible 6 minute experience.

The resulting footage is breathtaking. As the positive ground flash creeps its way to the surface, lightning physicist Vladislav Mazur and meteorologist Tom Warner explain its progress as they themselves get charged (if you’ll forgive the pun) with excitement. 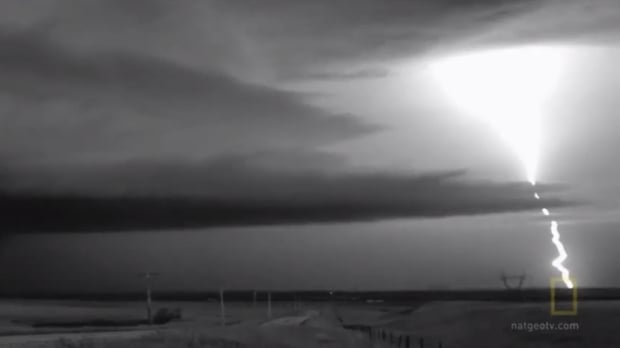 We’ve shared one other of Warner’s jaw-dropping videos of a slow-motion lightning strike, but even that footage was only shot at 7,207 fps. This, if possible, is even more impressive and telling. Mazur was one of the first scientists to ever study storms using high-speed cameras in the early 90s, but even he is blown away by the detail Warner has captured here.

The clip originally appeared on National Geographic’s Naked Science – Lightning Chasers. To learn more about lightning or see more amazing footage, head over to the show’s website by following this link.