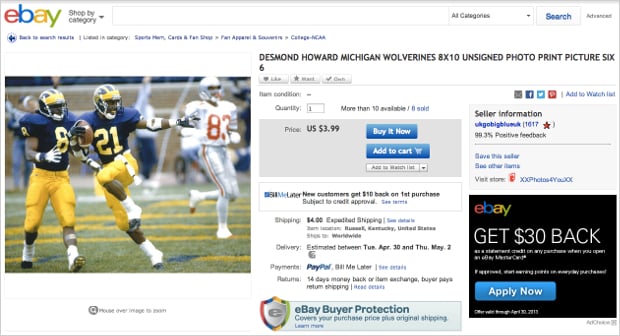 While browsing the internet recently, SportsShooter user Greg Bartram stumbled on an eBay store that was selling prints of several of his images. Upon taking a closer look, he realized that it wasn’t just him, ukgobigblueuk is selling 8x10s of just about any sports, celebrity or political photo he can get his hands on — and according to his description, he can “more than likely” get his hands on any photo you want.

If you take the time to browse through the massive archive of photos that ukgobigblueuk is selling, it seems that a lot of them are part of Getty’s and AP’s catalogues. He’s selling 8×10’s of everything from Neil Leifer’s famous Ali/Liston photo to Brian Masck’s Desmond Howard ‘Trophy Pose’ photo that is, ironically enough, currently at the center of an entirely different copyright suit. 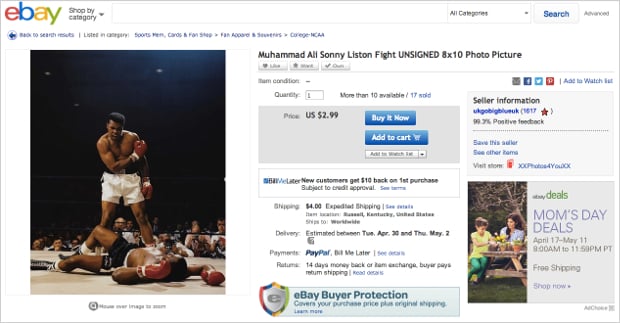 It’s important to note that ukgobigblueuk isn’t selling authorized, signed prints by famous photographers that he has collected over the years. He’s simply printing out (allegedly at very high quality) unofficial, unsigned 8×10’s of well-known and/or requested photographs and selling them through his online store.

Once Bartram discovered that his photos were being sold without his permission, he was able to speak to eBay and get those listings taken down, but for some reason eBay hasn’t (and it seems won’t) shut down the entire store. And even if they did, there’s no stopping him from setting up another store under a different user name.

We’re not sure if and when something will be done about this, but if you have some time and you’ve ever taken a well-known sports or celebrity photo, we suggest you search through his eBay store and make sure you’re not one of his victims. The sooner you can get a message out to eBay that he’s selling your photo illegally, the sooner they can get the listing taken down.