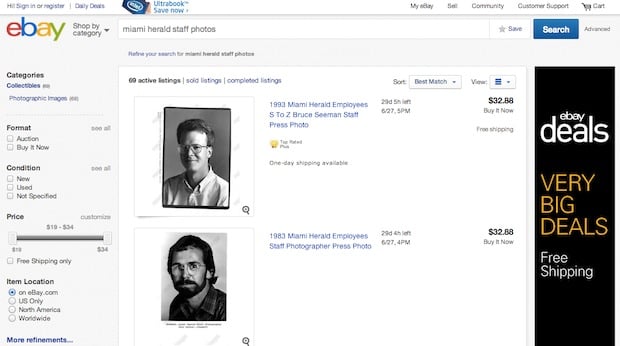 The Rogers Photo Archive is the largest privately held collection of still photos in the world. Having spent years on a buying-spree, offering cash and digitization services to once-dominant newspapers in exchange for their prints, the Rogers Photo Archive has amassed tens of millions of photographs, pulling in a healthy profit by putting a couple million of those images up for sale via various eBay stores.

The behind the scenes story goes something like this: John Rogers has spent the last decade and a half buying and selling large quantities of photos to the general public. By offering to digitize their archive for them (at blazing speed, we might add … the company can digitize 1.3 million negatives per month), he’s talked 11 of the biggest newspapers in the U.S. into selling him their entire archive of prints.

Initially, he made his money by selling off batches of famous sports photos to trading card manufacturers, or auctioning off celebrity photos to interested collectors. But now Rogers and his archive are attracting attention because they’ve begun selling significantly less famous photos, and they’re making a pretty penny doing it.

Right now, for example, you can purchase any one of 69 old staff photos that were once owned by the Miami Herald. Interested buyers can pick up a 1981 print of columnist Edwin Pope or a 1993 image of Amy Alexander for $28.88 and $32.88, respectively. Each individual photo may not be worth much, but in an interview with the Arkansas Times, the self-proclaimed “Walmart of Photography” claimed to be pulling in a whopping $120,000 per week on eBay alone. 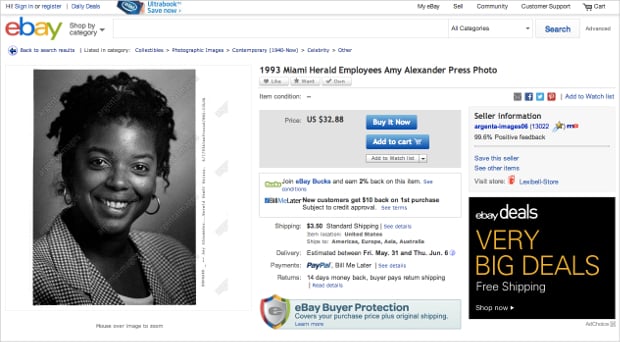 The photo subjects’ reactions range from mild annoyance to apathy. The aforementioned Amy Alexander writes on her blog:

The fact that I do not have control over my former staff photos is problematic, since the company’s choice to put it out to bid took place without my knowledge or consent. The fact that a price is being attached to my image, too, is problematic, mostly for issues of ego rather than safety or privacy. Why are my images going for $32.88 — why not a cool $33 … or $40?

Of course there’s nothing the writers can do about it. Even if Alexander wanted to push her old mug shot’s worth up to, say, $40, she won’t be able to. All sales are done on a Buy It Now basis.

A Look at Reducing Noise in Photographs Using Median Blending

The Sanity of Craziness: How Your Wild Imagination Can Be Good for Business