The video above is a commercial Canon is running over in Japan to promote its new Kiss X7/Rebel SL1, the world’s smallest and lightest DSLR. It shows how the camera is perfect for soccer moms who would like to capture action shots of their “super soccer kids.” 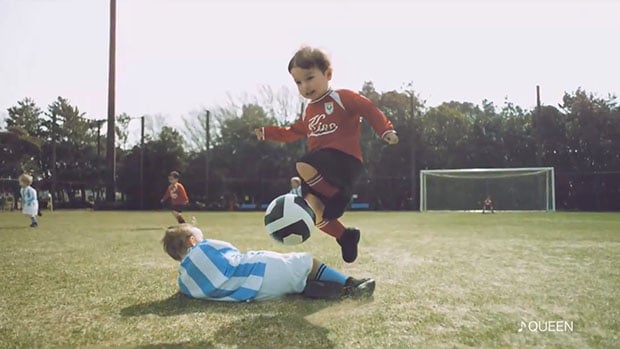 The formula works well: use computer tricky to create babies or place babies heads’ on adult bodies, make them do grown-up activities, and then watch your commercial go viral online.

Evian is setting new records with its latest “baby ad”. Since being uploaded to YouTube less than a week ago, the ad has gone viral and has amassed over 30 million views already:

It’s previous baby ad released in 2009 set a “most viewed commercial” record by racking up over 60 million views.

It’s nice when camera companies take their marketing ideas beyond commercials showing celebrities taking pictures of women from afar. Canon generated quite a bit of buzz last year for its “Inspired” commercial, and Nikon hit a home run the year before that with its inspirational “I AM NIKON” ad.

Simultaneous Photographs of and from a Mountain, Shot During a Sunrise