Photographer Jacob Kedzierski first came up with the idea to create a street sign collage eight years ago while riding a bike around the streets of his hometown of North Tonawanda, NY. After completing that project and moving to New York City, the idea for a Manhattan version crossed his mind several times, but he was never ready to commit to the amount of work it would take to actually get it done.

That was until he offhandedly mentioned that he was “working on” a Manhattan version at a local print shop. The owners had liked his North Tonawanda collage and when he mentioned Manhattan they offered him a spot in the front gallery area for when the project was done. He finally had his motivation.

Here are the two other collages Kedzierski has done, the first (mentioned above) depicts the streets his hometown, and the second the streets of Lyle, WA (click here to see larger versions of all three): 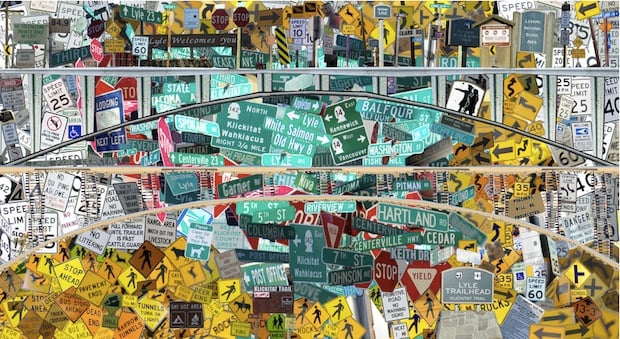 To actually shoot the Manhattan collage at the top, Kedzierski walked every single street from 145th down, only enlisting the help of busses, subways and friends with cars to shoot the street signs above that line. The collage took about 6 weeks to shoot and each photo was taken with a small digital camera (with some 35mm’s thrown in for fun).

And even though it took a crazy amount of work to shoot all of those signs, it was still the post-processing that took the longest. Kedzierski tells us,

My computer/Photoshop at the time couldn’t handle the whole canvas, so I built it in 8 sections, it was kind of a nightmare trying to figure out the work flow but after a month had a solid system down. I made a mock-up on paper and hung it above my computer to get the street sign sizes right, didn’t want them hard to see. For a solid 7 months I cut and pasted the signs into place.

The final collages aren’t, strictly speaking, “photography,” but it’s a very impressive project that took a lot of photography and legwork to put together, and snagged Kedzierski a spot at the Baboo Gallery in 2010. To see more of Kedzierski’s work — photography and otherwise — you can head over to his website by clicking here.

Image credits: Collages by Jacob Kedzierski and used with permission