One of standout commercials during the Super Bowl yesterday was the above ad by Chrysler promoting its Ram line of trucks. The 2-minute ad pays tribute to farmers across the nation, and is composed entirely of photographs showing various facets of the farming industry.

In the background is a famous speech given by radio broadcaster Paul Harvey during the 1978 Future Farmers of America convention, titled “So God Made a Farmer.” 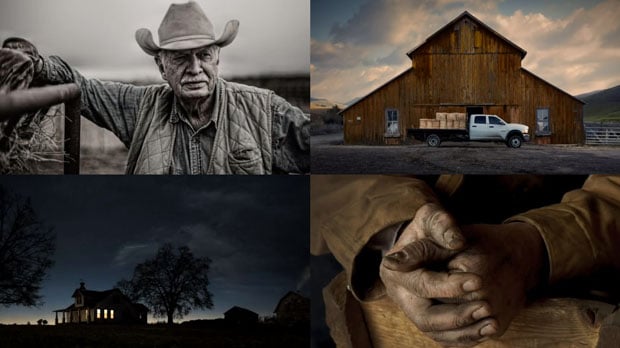 Here’s a transcript of the monologue:

And on the eighth day, God looked down on his planned paradise and said, “I need a caretaker.” So God made a farmer.

God said, “I need somebody willing to get up before dawn, milk cows, work all day in the field, milk cows again, eat supper, then go to town and stay past midnight at a meeting of the school board.” So God made a farmer.

I need somebody willing to sit up all night with a newborn colt and watch it die, then dry his eyes and say,’Maybe next year,’ I need somebody who can shape an ax handle from an ash tree, shoe a horse with hunk of car tire, who can make a harness out hay wire, feed sacks and shoe scraps. Who, during planting time and harvest season will finish his 40-hour week by Tuesday noon and then, paining from tractor back, put in another 72 hours.” So God made the farmer.

God said, “I need somebody strong enough to clear trees and heave bales, yet gentle enough to yean lambs and wean pigs and tend the pink-comb pullets, who will stop his mower for an hour to splint the leg of a meadowlark.”

It had to be somebody who’d plow deep and straight and not cut corners. Somebody to seed, weed, feed, breed, and brake, and disk, and plow, and plant, and tie the fleece and strain the milk. Somebody who’d bale a family together with the soft, strong bonds of sharing, who would laugh and then sigh and then reply with smiling eyes when his son says that he wants to spend his life doing what dad does. “So God made a farmer.”

Millions of people were likely reminded of a nearly identical video they had seen on YouTube over the past couple of years, one that was uploaded by Farms.com back in June 2011. That organization partnered with Chrysler for this latest Super Bowl spot to support the Future Farmers of America.

The photographic commercial instantly generated a good deal of buzz on the Interwebs and was very well received by football fans. ABC News reports that Twitter was full of positive comments toward the video.

The ad is also possibly one of the most expensive photo slideshows ever produced… The average cost of a 30-second Super Bowl ad this year was upward of $4 million, which means Chrysler may have paid close to $16 million to broadcast this photo-based ad. Wowzers.