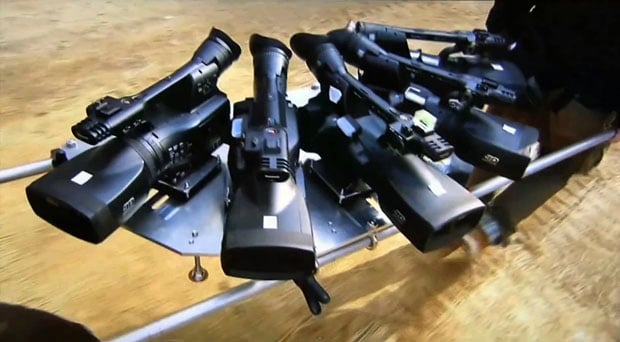 3D technology is consistently improving. And even though Samsung may have pioneered single lens 3D technology, Panasonic have put together an impressive rig that can shoot 3D panoramas.

The array is part of a project called Dive Into World Heritage 3D, in which Panasonic went and captured seven world heritage sites so that people could experience them even if they can’t afford to travel there.


The array is composed of five strategically placed AG-3DA1 3D camcorders tethered to small, high-performance recording devices that are carried around in what looks like the most uncomfortable backpack on the planet. To display the final panoramic product, Panasonic uses five separate high definition displays.

For now, the Dive Into World Heritage 3D project is all the use the company’s 3D array is getting, but more ideas are in the works. Much like Google’s photo tours of historic landmarks, Panasonic hopes to eventually use the 3D system to capture famous pieces of art, or possibly provide a panoramic 3rd dimension for future Olympic Games.

Greg Heisler on Photography Techniques and Drawing Inspiration from Within