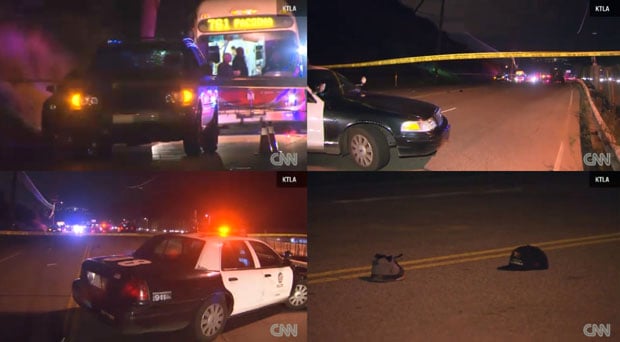 Back in July, after witnessing what essentially amounted to a high-speed car chase down the 101 between paparazzi and Justin Bieber, city councilman Dennis Zine predicted that these practices were “a tragedy waiting to happen.” In an attempt to prevent similar incidents in the future, one of the photogs involved was even taken to court, charged under a new anti-paparazzi law.

But unfortunately, the message doesn’t seem to have gotten across. Yesterday, while trying to get a closer look at what he believed to be Justin Bieber pulled over by a highway patrolman, a paparazzo was struck by an oncoming vehicle, passing away from his injuries shortly after.

The tragedy happened on an off-ramp off of Interstate 405, when the as-of-yet unidentified photographer saw Justin Bieber white Ferarri pulled over by California Highway Patrol. Parking his car across the street, he got out to get a closer look, hoping to snap a photo of the 18-year-old star and ignoring several warnings from the officer.

A short time later, once the paparazzo realized that Bieber wasn’t even in his Ferarri, he headed back towards his car; but before he was able to get back, he was hit by an oncoming vehicle.

Although he wasn’t in the car, Bieber did release a statement offering his condolences to the family of the victim, and asking again for what he sees as much-needed legislation that would protect not only celebrities and the police, but the paparazzi as well.

Instagram, Acquisitions, and the Long-Term Ownership of Your Personal Data