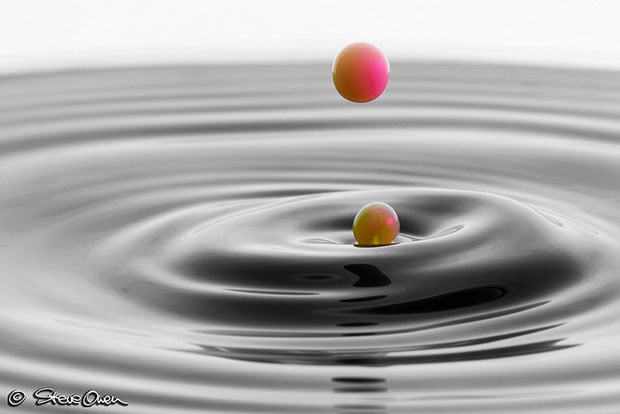 I recently captured the macro liquid splash photograph above, and found that it came out looking like it was computer generated. Here’s a brief description of how the photo was created.

Here’s a photo showing the setup I used: 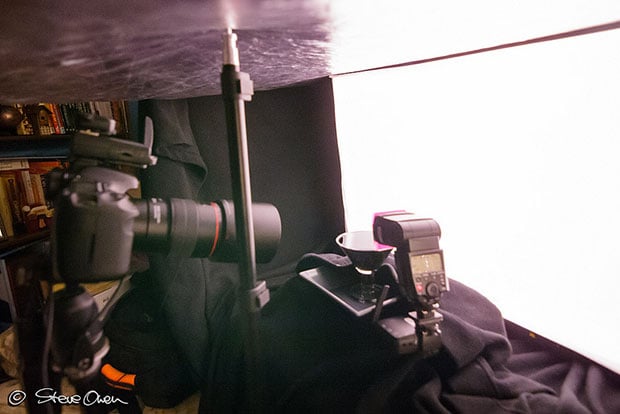 The white thing on the right is a softbox with an Einstein E640 flash (it’s blown out white because the modeling light was on). Above is a round reflector, though to be honest I don’t think it was doing much.

The water receptacle is my wife’s favorite martini glass filled to the brim with just regular tap water. To the right of the glass is a Canon 580EX flash sitting on a PocketWizard remote transceiver.

My Canon 7D (with Canon 100mm f/2.8L IS macro lens) was triggered with a wired hand-held trigger (TC-80N3). Food coloring or other liquid was dropped by hand and timed manually by watching the drop and trying to time hitting the trigger for the moment of impact.

For this shot, I already been doing some food coloring splash shots, so the water had various colors swirling around in it. I used some drops of milk to get this and what you see is the end of the splash where there’s an ejection of liquid from the splash shot.

The drops look colorful because they’ve already gone into the colorful water and mixed a bit before being ejected. The surface looks kind of grey and glassy because the angle I had the camera at relative to to the surface of the water.

I didn’t do much post-processing except for a crop, some increase in contrast, and a de-saturation of color along the back edge of the glass (the whole surface was already de-saturated).

About the author: Steve Owen is a photographer based in New England. Visit his Flickr page here.

A Beginner’s Primer on Post-Processing Photos in Lightroom 4