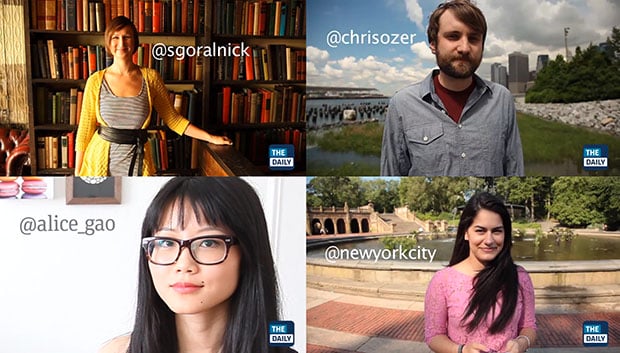 Who are the people behind Instagram’s most-followed handles? Soon-to-be-shuttered iPad newspaper The Daily wants to know, and has a video series titled “#No Filter: Behind the Lens with Instagram’s Biggest Stars.” They’re creating short profiles for each iPhoneographer to give a glimpse into their lives and their motivations.

There are four videos in the series so far:

Steph Goralnick (@sgoralnick) is a Brooklyn, New York-based graphic designer and photographer. She has been an Instagrammer since October 2011, and has amassed 263,000 followers. Her style: “colorful mayhem.”

Chris Ozer (@chrisozer) is a Brooklyn, New York-based photo enthusiast who works as a recruiter for New York University. An Instagrammer since December 2011, he now has 261,000 followers. His style: “urban landscapes.”

Alice Gao (@alice_gao) is a New York City-based photographer. She has 283,000 followers.

Liz Eswein (@newyorkcity) is the New York City-based co-founder of Mobile Media Lab. She has been sharing photos on Instagram since December 2011, and has gained 538,000 followers. Her style: “urban landscapes.”

The people here don’t just have hundreds of thousands of people around the world tuned to their stream of photos… they enjoy very nice perks as well from companies looking to capitalize on their massive audiences.

You can follow along with this video series through this YouTube channel. The last video was uploaded in August, though, and the newspaper behind them will be closing its doors soon, so we’re guessing there won’t be any more profiles.